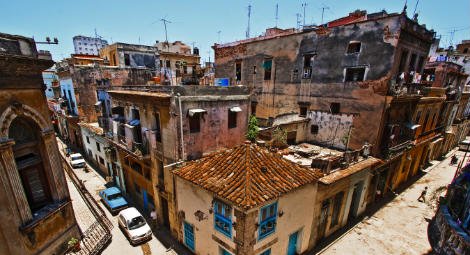 Two years after government orchestrated mobs to target his home, Reverend Yiorvis Bravo is renewing his call to the Cuban government to recognise his ownership of the property, which also serves as the headquarters of his denomination.

Reverend Bravo Denis has been fighting for two years for his right to be recognised as the legal owner of his home, which also acts as the national headquarters of the Apostolic Movement, a Protestant denomination which the government refuses to register. He and his family face the threat of eviction at any time.

This week Reverend Bravo Denis told Christian Solidarity Worldwide that state security officers continue to harass his friends and members of the church because of their connection to him, while his family has expressed concern at recent unexplained damage to the front of the home.

“We have a lot of questions, but we simply continue to pray and declare words of favour for the entire situation. It is necessary to keep pressuring [the government] through the media and human rights institutions and continuing to knock at every door that we come to on our path,” he said.

Reverend Bravo Denis also continues to wait for the Inter-American Human Rights Commission (IAHRC) to issue its findings with regard to a Request for Precautionary Measures filed on 21 May on his behalf.

The law firm Poblete Tamargo, which represents Reverend Bravo Denis, told CSW that they are concerned at the length of time the IAHRC is taking. “While our client's rights continue to be trampled by the communist government of Cuba, the Commission is taking an unusually long time reviewing this case. Our client hopes that the Commission, and other interested parties in Washington DC, will be a little more proactive,” said lawyer Jason Poblete.

On 18 September 2013, Reverend Bravo Denis was summoned to appear before the Ministry of Justice in Camagüey with Reverend Gude Perez, where, after a 20-minute court hearing it was decided that despite all the legal notarised documents proving his ownership of the property, Reverend Bravo Denis and his family should be evicted and the government should take over ownership.

Reverend Bravo Denis has refused to leave the property despite government-organised 'acts of repudiation' targeting the home of Rev. Bravo Denis and his family. This involved state security agents, police and members of paramilitary groups dressed as civilians surrounding the house for days, shouting insults and throwing rocks, eggs and other hard objects in an attempt to force them out.

CSW’s Chief Operating Officer Andy Dipper said, "We continue to be deeply concerned by the precarious situation in which Yiorvis and his family are living, in constant danger of eviction because of the Cuban government’s stance. The Cuban authorities’ attempts to force him to pay rent on his own property and their actions preventing him from travelling outside the country because of this ‘unpaid rent’ amounts to nothing more than extortion. We call on the Cuban government to restore his property rights and also urge the IAHRC to issue its findings as soon as possible. Action from the IAHCR is critical not just for Yiorvis and his family but for other churches and religious organisations across Cuba who are also facing government attempts to illegally expropriate their property in a similar manner.”