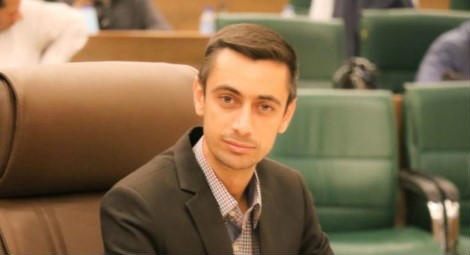 City Councillor imprisoned for speaking up for Baha'is

Mehdi Hajjeti, a local councillor in Shiraz, a city of southern Iran, was arrested by Iranian authorities on 2 June and given a one-year prison sentence after expressing empathy with Iranian Baha’is. He had been on bail following an earlier arrest for criticising the government’s treatment of Baha’is.

Mr Hajjeti was arrested after he reportedly tweeted about two Baha’i friends who are currently in prison. The tweet, which was in Arabic and has since been deleted, roughly translated as: “Our generation has a responsibility to reform the judiciary system and other legislation that contradicts social justice.”

Mr Hajjeti was out on bail following his conviction and sentencing in September 2018 for criticising the government’s treatment of the Baha’is. He had been released on bail ten days after his initial arrest.  On 2 June Mr Hajjeti’s wife tweeted that her husband had received a text message from the police on 1 June informing him that a court had upheld the sentence against him. He was arrested at his home on 2 June and taken to serve his sentence in Adel Abad Prison.

On 10 April 2019 a local councillor in Asfahan, Mehdi Megderi, was summoned to court by authorities after he had expressed sympathy for Mr Hajjeti on social media. Mr Megderi was asked to clarify his opinions and was subsequently banned from attending council meetings for six months. He was told that he would be observed closely during his ban.

The Baha’i are one of the most persecuted religious minorities in Iran. Their community is not recognised in the Iranian constitution and therefore cannot benefit from the rights ostensibly afforded to other recognised religious minorities. They face systematic discrimination, both within the educational system and in the wider society. A government memorandum released in 1991 set out a strategy in response to what it termed the ‘Baha’i Question’ that has had far reaching implications, particularly with regard to education and job opportunities.

CSW’s Chief Executive Mervyn Thomas said: “These recent arrests highlight the ongoing campaign against religious minorities in Iran and the continued failure of the Iranian authorities to uphold the rights enshrined in the International Covenant on Civil and Political Rights to which Iran is party, and in particular, the right to freedom of religion or belief. We urge the Iranian authorities to end the harassment of peaceable religious communities to afford full citizenship rights to the Baha’i community, and to immediately release all those who are detained on account of their religion or belief.  We also call for the release Mr Hajjeti, whose right to freedom of opinion and expression has been violated simply for expressing his belief in ‘the inherent dignity and equal and inalienable rights’ of the Baha’i community, in line with the preambles of the ICCPR and the Universal Declaration of Human Rights.”