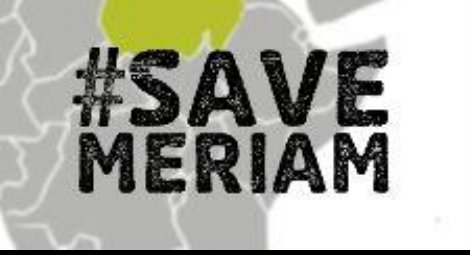 Meriam Ibrahim, whose death sentence for apostasy was quashed, was released from police custody on bail, along with the rest of her family. The police have charged Mrs Ibrahim with forgery and provision of false information. Read our full press release here. Please continue to pray urgently for the whole family.

Meriam and Daniel were arrested at the airport and their lawyers were threatened with arrest by the government security agency.

Monday 23 June 2014: Declared innocent of all charges and released from prison

Meriam Ibrahim, the Sudanese Christian sentenced to flogging and death for adultery and apostasy, was released from prison. Her convictions were overturned and her marriage has been recognised. She and her children are now with her husband, Daniel.

Your next steps - please keep praying for Meriam

Please keep praying for Meriam and her family using our prayer points.

Meriam Yahia Ibrahim is a Sudanese Christian. She was sentenced to death for ‘apostasy’ – leaving Islam – although she’s been a Christian all her life. She gave birth to her daughter, Maya, in prison on 27 May, where she remains with Maya and her toddler, Martin.

Although she testified that she is a life-long Christian, the court ruled that she abandoned Islam, and that therefore was originally Muslim. Since Muslims are not allowed to marry non-Muslims, her marriage is deemed invalid under Islamic law – so she has also been sentenced to 100 lashes for adultery.Her sentences are currently under appeal.

At the moment both Martin and baby Maya are in prison with their mother. But when Martin turns two in a few months’ time the situation will change, and unless he receives US citizenship he faces being brought up away from both his parents.