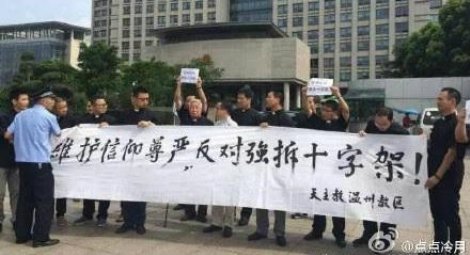 Catholic and Protestant church leaders, lay Christians and human rights lawyers have spoken out publicly about the ongoing government campaign to demolish  churches and forcibly remove crosses from buildings in China’s Zhejiang Province.

In early 2015, a vice-chair of the Chinese Catholic Patriotic Association, a state-sanctioned religious association, claimed that the government had ordered an end to the spate of cross removals and church demolitions in Zhejiang. However, although the pace of such events has slowed since its peak from April to July 2014, authorities in the province are still removing crosses from both Catholic and Protestant churches. Christian Solidarity Worldwide (CSW) recorded 32 cross removals in May-July this year, although the actual figure is likely to be much higher.

Catholic and Protestant church leaders, lay Christians and human rights lawyers have spoken out publicly about the campaign.  Bishop Vincent Zhu Weifang of Wenzhou, having issued a pastoral letter in July 2014 calling the policy of demolition of churches "wrong and unjust", led a protest on 24 July 2015 outside government offices in Wenzhou. According to UCANews, the Bishop was joined by 20 other priests in calling on the authorities to end the removal of crosses in the province. Other Christians have responded to the continued campaign by constructing their own crosses from wood. Christians in the province have used social media to encourage others to hang up crosses in their homes. Christian lawyers have also come together in response to the demolitions and cross removals. On 14 July 2015, China Aid reported that human rights lawyer Zhang Kai had announced the formation of Lawyers for Protection of the Cross, which aims to “fight for religious freedom according to China’s existing laws”. The launch of the group comes amid a crackdown on human rights lawyers across China: over 250 lawyers and their associates and family members have been detained, questioned or disappeared since 10 July.

CSW’s Chief Executive Mervyn Thomassaid, “The ongoing campaign to forcibly remove crosses and demolish churches in Zhejiang has had a profoundly negative effect on Catholic and Protestant churches in the province. Many church leaders have patiently and repeatedly tried to negotiate and enter into dialogue with the local authorities; the protests and petitions by leaders and lay Christians are a sign that their concerns have not been addressed. Instead, the authorities persist in eroding all trust between the government and the churches by forcibly removing the symbol of the Christian faith. CSW joins Zhejiang Christians in calling on the authorities to cease immediately the removal of crosses and other actions against registered and unregistered churches. At the same time, we remain deeply concerned by the wave of arrests, interrogations and disappearances of lawyers and activists since 10 July. We urge the government to release all lawyers, activists and other individuals still detained, and to allow the legal community to defend their clients without disruption, intimidation or threats.”