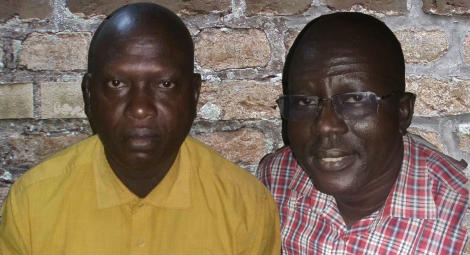 Reverends Yat Michael and Peter Reith, the South Sudanese clergymen who were on trial in Khartoum on serious criminal charges, have been released following a court hearing on 5 August.

The clergymen faced at least six charges, including undermining the constitutional system (Article 50); espionage (Article 53); promoting hatred amongst sects (Article 64); breach of public peace (Article 69); and offences relating to insulting religious beliefs (Article 125). Of the charges, Articles 50 and 53 carry the death penalty or life imprisonment in the event of a guilty verdict.

During today’s hearing Rev Michael was convicted of inciting hatred and Rev Reith of breaching public peace, but both were released on time served. In a comment to Christian Solidarity Worldwide (CSW) Rev Michael said: “I am feeling free because I was in jail for many months.  I have become like I’m born again.”

Rev Michael and Rev Reith were detained on 14 December 2014 and 11 January 2015 respectively. Until 1 March, they were held incommunicado by the National Intelligence and Security Service (NISS), after which they were transferred to the Attorney General’s custody, charged with the six crimes and brought before court.

Since being moved to the maximum security Kober Prison on 6 June, the pastors had not been allowed visits from their families or legal team, despite repeated appeals, and could only consult with their lawyers briefly prior to court hearings.

However, on 3 August Rev Reith was permitted a telephone call to his lawyer and informed him that although he was suffering from malaria and a chest infection, his condition had somewhat improved.

On 4 August came reports the cases of eight Christian women accused of dressing indecently were being transferred to a different court following procedural irregularities by the trial judge.

CSW’s Chief Executive Mervyn Thomas said, “We are overjoyed at the clergymen’s release from prison. While we welcome this news, we remain concerned at the irregularities in their case and the ongoing harassment of Christians in Sudan that results in court cases such as this against the pastors and the young women, who were arrested on public indecency charges and could still face lashes. We will continue to advocate for them and for all others who are being targeted on account of their faith. We continue to urge Sudan to uphold its constitutional guarantees for freedom of religion or belief and its responsibility to promote and protect this right under international law, in order to preserve Sudan’s pluralism and diversity.”