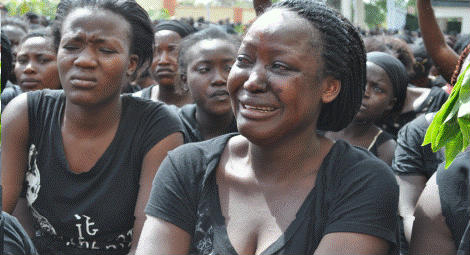 The President of the Ekklisiyar Yan’uwa a Nigeria (EYN, Church of the Brethren in Nigeria) has revealed that over 176 of the girls kidnapped from a school in north east Nigeria by Boko Haram terrorists last year are from families belonging to his denomination.

Reverend Samuel Dali’s revelation coincides with a Global Week of Action launched by local activists to commemorate 500 days since the abductions.

Speaking to local media, Reverend Dali added that over 8,000 members of his church had lost their lives and 70 percent of church facilities in Adamawa, Yobe and Borno States had been destroyed during the Boko Haram crisis, including the church’s headquarters in Mubi, Adamawa State, which was seized in October 2014. In addition, an estimated 90,000 EYN church members are reported to have been displaced by terrorist violence.

On the evening of 14 April 2014, Boko Haram gunmen invaded the predominantly Christian town of Chibok in the Gwoza Local Government Area (LGA) of Borno State, setting fire to homes and public buildings and looting food items, before kidnapping over 200 students from Government Girls Secondary School (GGSS), who were taking the West African Examination Council (WAEC) examination.

This week the “Bring Back Our Girls” campaign began a Global Week of Action commemorating the 500th day since the Chibok Girls disappeared, which falls on 27 August. The week of activities includes prayers, tree planting in honour of the girls, meetings with the Chief of Defence Staff and the National Human Rights Commission (NHCR), and a march and candle light procession in Abuja on 27 August.

During a two-day visit to Nigeria which began on 23 August, United Nations (UN) Secretary General Ban Ki-Moon appealed “as UN Secretary General and personally as a father and grandfather” for the unconditional release of “the Chibok girls and the many children and adults kidnapped in the North East.”

Mervyn Thomas, Chief Executive of Christian Solidarity Worldwide (CSW), said, “Our thoughts and prayers remain with the abducted girls, whose plight is too horrendous to contemplate, and with their parents, who continue to suffer immeasurably. The mass rape and sexual enslavement of women and girls rank among the worst of the numerous war crimes committed by Boko Haram. The sect’s professions of impeccable religious credentials do not tally with its propensity for rampant sexual violence and indiscriminate murder.  It is in reality a death cult that indoctrinates members to kill without conscience, regardless of the creed espoused by its victims. We continue to join with people of goodwill in Nigeria and the international community in praying for safe return of the Chibok Girls and all other hostages, and for this brutal insurgency to be brought to a swift conclusion.”