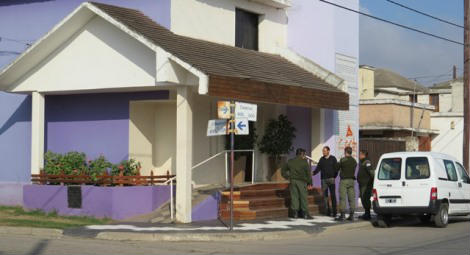 The National Gendarmerie, a high-level police guard, has been assigned to protect the Pueblo Grande Baptist Church and its members in Tres Ríos, Argentina.

The protection order, issued by Federal Prosecutor Maria Marta Schianni, follows a decision by the Federal Appellate Court in the province of Córdoba on 29 May, which recognised systematic discrimination against and the persecution of church members. It directed a federal judge assigned to the case to take swift action to move the case forward and to protect the church’s freedom of worship. The Federal Appellate Chamber also instructed the National Institute Against Discrimination, Xenophobia and Racism (INADI) to open an investigation into discrimination against members of the evangelical church.

According to Reverend Marcelo Nieva, leader of Pueblo Grande Baptist Church, the assignment of 50 members of the National Gendarmerie to provide round-the-clock protection to the church and its members is unprecedented in Argentina. They replace a Federal Police detail which had been guarding the church for the last year. “The National Gendarmerie is the highest security force in the country, and this historic move shows that some officials in the government are taking the threats and acts of violence against the church and its members seriously,” Reverend Nieva told Christian Solidarity Worldwide (CSW).

However, he expressed disappointment that both INADI and Roque Ramón Rebak, the judge assigned to the case whose attempts to declare the case outside of the court’s competence were rebuffed by the Federal Appellate Chamber, have failed to take any action to implement the 29 May order.

In October 2014, CSW called for a full investigation and charges to be brought against those responsible for the attempted murder of Reverend Nieva and church member Daniel Carreño after the car they were driving was shot at multiple times on 21 October 2014. They were not wounded.

National and Provincial Baptist leaders in Argentina expressed alarm at the attack, pointing out that attempted murder of the pastor was the latest and most severe instance in a pattern of threats and harassment against him. Church leaders believe the pastor and the church have been targeted by corrupt politicians and members of the local police force because of the church’s ministry with victims of sex trafficking and drug addicts.

The church building has been vandalized repeatedly over the past three years and members of the church continue to suffer harassment and physical attacks, allegedly at the hands of individuals linked to narco-trafficking groups and corrupt officials. The assignment of the National Gendarmerie to protect the church is significant as they are primarily responsible for investigations into drug and human trafficking.

Pueblo Grande Baptist Church received national and international attention in 2013 when charges were brought against the pastor under ‘anti-cult’ legislation adopted on the provincial level. Argentinian denominational leaders and legal experts criticised the vaguely written anti-cult law used to target the church, which belongs to a denomination with a 105-year history in the country. Legal experts in Argentina also point to Decree 2037, made under the military dictatorship in 1979 but which is still in effect, which makes registration with the government compulsory for all religious groups except the Roman Catholic Church, as a contributing factor leading to discrimination in this case and others.

CSW’s Chief Executive Mervyn Thomas said, “We are encouraged by the orders issued by the Federal Appellate Chamber recognising that Pueblo Grande Baptist Church and its members have been the victims of systematic discrimination and which orders Judge Roque Ramón Rebak and INADI to take swift action on the case. The decision by Federal Prosecutor Schianni to provide the highest levels of protection to the church and its members is also laudable, but we continue to be deeply concerned by the underlying issues that make this level of protection necessary. We call on Judge Roque Ramón Rebak and on INADI to take the action mandated by the Federal Appellate Chamber. We also urge the government of Argentina to review laws at both the federal and provincial levels that open the door to violations of freedom of religion or belief.”