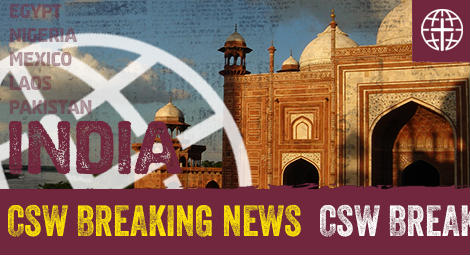 CSW is calling on Prime Minister David Cameron to raise the plight of India’s religious minorities and shrinking space for civil society in bilateral discussions with Indian Prime Minister Narenda Modi on his first official visit to the United Kingdom.

Mr Modi’s official visit from 12-14 November is the first by an Indian prime minister in nearly a decade.

Since Prime Minister Modi and the Bharatiya Janata Party (BJP) came to power in May 2014, there has been a marked rise in hostility towards religious minorities across India. Hindu nationalism is also on the rise; in the three months after BJP’s electoral victory, nearly 2,000 branches (shakhas) of the Hindu nationalist organisation Rashtriya Swayamsevak Sangh (RSS), the ideological wing of the BJP, were established.

CSW has learned that there have been an estimated 43 deaths in over 600 cases of violence against religious minorities between May 2014 and May 2015, with the majority of attacks perpetrated against Muslims and approximately 194 Christians targeted. An atmosphere of religious intolerance and impunity is further stoked by recent mob hysteria over beef consumption. On 28 September, Mohammad Akhlaq Saifi was lynched by a mob in Dadri, Uttar Pradesh for allegedly consuming beef meat. Pervasive discrimination and systematic attacks against the Dalit community, who are often Christians, also continues to increase. In March, CSW expressed concern about a spate of attacks on churches and Christian communities.

Impunity often follows attacks against religious minorities. Justice is still outstanding for the victims of communal violence in Muzaffarnagar, Uttar Pradesh State in 2013, which led to 39 deaths and 25,000 displaced, most of them Muslims. Similarly, no one has been held to account for communal violence in Kandhamal, Odisha State in 2008, which targeted Christians and claimed an estimated 100 lives, leading to the displacement of around 56,000 people and the destruction of 295 churches and places of worship.

Advocacy groups and human rights defenders have increasingly come under attack, leading to concerns about the shrinking space for civil society since Modi came to power. Writers and critics of right-wing fundamentalism have been murdered or attacked, such as Govind Pansare, who was killed in February 2015. He had received death threats after a speech in which he alleged that attempts were being made to glorify Mahatma Gandhi's assassin Nathuram Godse since the BJP came to power. A number of Indian writers, artists and scientists have returned their national Sahitya Akademi awards in protest against the government’s failure to apprehend the perpetrators of these crimes.

CSW’s Chief Executive Mervyn Thomas said, “India’s success as the world’s largest democracy cannot be measured in purely economic terms without reference to its rights record, and the UK’s relationship with India should not focus on trade to the detriment of the enduring values which we hold dear. As the UK reaffirms the values of the Magna Carta this year, CSW urges Prime Minister David Cameron to raise the erosion of fundamental liberties in India with Prime Minister Modi, and to encourage him to ensure that the rights of all of India’s citizens are upheld, including the right to freedom of religion or belief. The UK must be vocal in demonstrating that trade does not trump human rights and democratic ideals.”