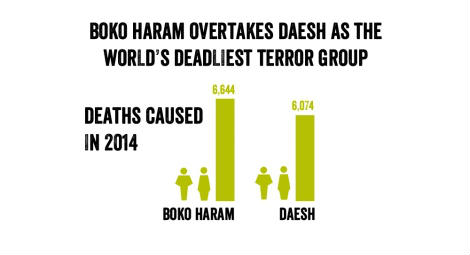 Boko Haram has overtaken Daesh (Islamic State or IS) as the world's deadliest terror group, a new report has found.

The Global Terrorism Index, published by the Institute for Economics and Peace, has revealed that Boko Haram (a militant Islamist jihadi sect) has killed more people than Daesh, being responsible for 6,644 deaths in Nigeria during 2014. By contrast, Daesh is believed to have killed 6,074 people in the same period.

While Daesh may have filled our headlines more regularly,  Boko Haram has been responsible for a campaign of violence over the last decade that has forced more than two million people to flee their homes. The attacks have targeted Christians, Muslims who don’t share their ideology and federal government targets such as schools, the police and the military. The group is increasingly mounting attacks in southern Chad and Cameroon.

What does this mean in practice?

Take the example of Ekklesiar Yan’uwa a Nigeria (EYN), the Church of the Brethren in Nigeria, the largest Christian denomination in the area regularly attacked by Boko Haram. We met their president, who told us they had managed to confirm the deaths of  8,083 church members in  the north east, including three pastors, before a sharp increase in violence forced them to flee in late 2014. The church is caring for 10,000 widows, many with children. Also, 700,000 EYN church members have been displaced as a result of Boko Haram’s attacks. To compare, that’s equivalent to around half the members of the Church of England being forced out of their homes.   Over 1,400 EYN churches and church-run schools have been destroyed and the church was forced to relocate its denominational headquarters to Plateau State after its facilities were overrun in October 2014.

Boko Haram pledged allegiance to Daesh in March this year, and now calls itself Daesh’s West African Province. In an indication of the scale of violence, the Global Terrorism Index found that Nigeria experienced a 300% rise in fatalities from acts of terrorism in the past year, including from Fulani militants, who attack non-Muslim villages in central states . CSW continues to work through partners in Nigeria and to assist victims of violence and draw the world’s attention to this rapidly -growing threat. 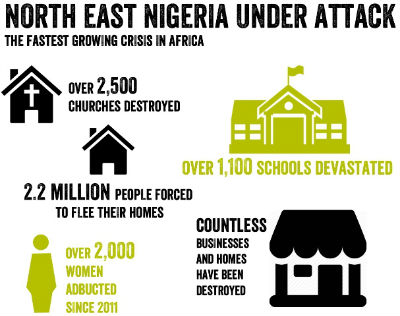 Statistics from the UN