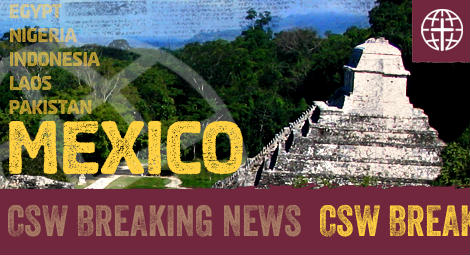 Chichiltepec Village officials signed an agreement this week which paved the way for two displaced Protestant men to return to their homes with guarantees of full religious freedom for all, in a process overseen by the Public Ministry in the Mexican state of Hidalgo.

Casto Hernández Hernández, now 31, and his cousin Juan Placido Hernández Hernández, aged 26, both members of the United Pentecostal Church of Mexico, were forcibly displaced in March 2015 after they refused to renounce their faith. They were imprisoned by village officials in Chichiltepec village, Tlanchinol Municipality, on 12 March. While imprisoned, they were put under pressure to renounce their Protestant faith. When they refused to do so after 30 hours, they were released and told they had 18 hours to leave the community.

Christian Solidarity Worldwide (CSW), accompanied by the Mexican religious freedom organisation Impulso 18, met with the two men in April 2015 and subsequently secured funding for their legal representation by lawyers affiliated with Impulso 18. Initial hearings with the State Commission for Human Rights (CEDH) focused on the religious intolerance instigated by the village delegate, Jesús Domínguez Hernández. Evidence was presented including a photograph showing the two men in detention and a 40-minute video of the assembly at which Casto Hernández Hernández was pressured to renounce his faith. A local representative from the State Human Rights Commission also gave testimony to support Casto and Juan Placido’s case.

Despite the open admission in early hearings by Domínguez Hernández to the CEDH that he had attempted to force the men to change their religious beliefs, the case dragged on for almost one year with the Public Ministry repeatedly cancelling or postponing hearings. In October 2015, the two men told CSW that they had been pressured by government officials, without their lawyers present, to drop the case and to return to their community. No guarantees were given that their religious freedom would be respected.

In November 2015, a change of personnel at the Public Ministry resulted in yet another delay when the incoming director communicated that he wanted to fully review the case before making any decision. This review came to a close with the agreement, described as “groundbreaking” for the region by local NGOs, that was put in place earlier this week.

Impulso 18’s Director Dr Jorge Lee Galindo said: “We, and more importantly Casto and Juan Placido, are very pleased with the outcome of this process. The village authorities came to the hearing planning to fight but when they realised they were only a step away from going to prison, they changed their position. We hope that this case will set a precedent in Mexico and contribute to an overall change in culture, where the law is applied correctly and religious freedom for all, as protected in our constitution and in the various international treaties to which Mexico is party, is upheld.”

CSW’s Chief Executive Mervyn Thomas said, “We are tremendously encouraged by the actions of the Hidalgo state Public Ministry this week and by the village authorities’ recognition that freedom of religion or belief must be guaranteed for all. We commend the work of the legal team and all of those at Impulso 18 on behalf of Casto and Juan Placido, and note that their persistence and insistence that the law be upheld led to this result. As Casto and Juan Placido return to their homes following their courageous fight to defend their rights, we hope that this will lead to increased respect for religious freedom not only in the village of Chichiltepec, but in the state of Hidalgo and all of Mexico, and that local authorities will understand that there are consequences for violating the law and persecuting religious minorities.”