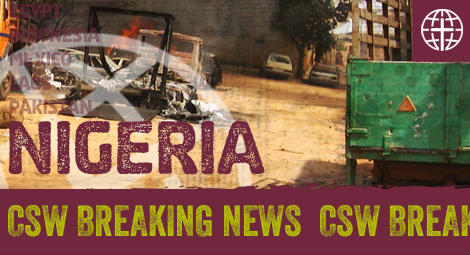 The Evangelical Church Winning (ECWA) has voiced concerns over a surge in attacks by Fulani militia on villages in the Sanga, Kaura, and Jema’a Local Government Areas (LGA’s) of Southern Kaduna in central Nigeria, and has urged Christians to join in three days of fasting from 21 to 23 November.

At a press conference convened at ECWA’s Kaduna Central District Church Council (DCC) secretariat on 16 November, a statement read by the chairman of 19 DCCs Fellowship, Reverend Zachariah Gado, decried “a campaign of ethno religious cleansing by Fulani herdsmen militia” that has targeted churches and forcibly displaced thousands of villagers, whose lands have subsequently been occupied by herders and their families.

The statement also denounced frequent abductions, forced conversions and marriages of underage girls in Kaduna State, highlighting the case of 15 year-old Sarah Jonathan, who was abducted on 16 August.  Sarah was allegedly taken to the palace of the Emir of Saminaka before being “married off”, and her father, an ECWA member, was being forced to appear before a Shari’a court by her abductors.

The press conference took place three days after an attack on five communities in the Chawai Chiefdom of Kaura LGA. Armed herdsmen descended on Kigam, Kitakum, Unguwan Magaji, Unguwan Rimi and Kizipi at around 3 pm on 13 November, killing 35 people, including children and pregnant women, and looting 120 homes before destroying them. In an indication of the scale of the destruction, all six churches were burned down in Kigam; the primary school was the only building left standing.

According to the statement: “Since the latest onslaught on Southern Kaduna began at least 138 people have been killed, most of them women and children, and at least 1,300 homes and churches have been torched.” The killings in the Chawai Chiefdom bring the recorded death toll within the last six months alone to 98.

The ECWA statement noted that ethno-religious cleansing may have intensified after the Kaduna State Government announced its intention to allocate 20,000 hectares of land in Southern Kaduna towards grazing reserves, over and above land already occupied illegally by the herders.

The statement concludes with appeals to State and Federal authorities to ensure the return of all abducted minors and the prosecution of their abductors.  It also calls for the arrest and prosecution of those behind the violence in Southern Kaduna, an end to plans for grazing reserves, the restoration of occupied land to its rightful owners, humanitarian relief for the displaced, and for an army barracks to be situated in the affected area to deter further violence.

Mervyn Thomas, Chief Executive of Christian Solidarity Worldwide (CSW) said, “Creating grazing reserves that may benefit perpetrators of ethno-religious cleansing would not only constitute a grave injustice; it could also worsen existing tensions. We urge State and Federal authorities to focus instead on providing adequate humanitarian assistance to victims, ensuring perpetrators are disarmed and prosecuted to the fullest extent of the law without fear or favour, and facilitating the return of illegally occupied land. In addition, the security forces must be mandated and equipped to mount effective interventions in defence of vulnerable communities. CSW therefore echoes the call for an army barracks to be situated in this crisis prone area in order to deter further violence.”