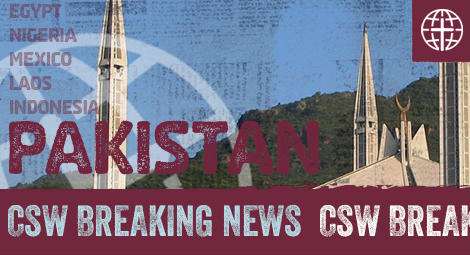 The anti-terrorist court in Pakistan has sentenced five men involved in the murders of Shama Bibi and Shezad Masih, the Christian couple burnt alive in a brick kiln in 2014.

On 23 November, five men were sentenced to death and fined 200 000 rupees (approximately £1538) each, while a further eight men were each sentenced to two years imprisonment.

The sentence comes two years on from the attack on 4 November in which pregnant mother Shama Bibi and her husband Shezad Masih were lynched and burned to death in a brick kiln in the village of Kot Radha Kishan, close to the industrial city of Kasur in Punjab province. The couple was killed by a mob incited to violence by a false blasphemy accusation against Shama, who was accused of burning pages of the Qur’an.

On 16 April, Yousaf Gujjar, the owner of the brick kiln and one of the main suspects in the case, was released on bail by the anti-terrorist court. He was charged with inciting a prayer leader to declare, over the loudspeaker of a mosque, that Shama and Shezad were guilty of blasphemy. The judge also strongly criticised the police for negligence in failing to stop the mob attack on the couple.

The blasphemy laws in Pakistan, codified in sections 295 A-C of the Pakistan Penal Code, continue to be widely abused and false blasphemy accusations are often used to settle personal scores and resolve disputes over money, property and business rivalries. While the majority of accusations are registered against Muslims, religious minorities are disproportionately affected by accusations, which put the individual, their family and community at risk of violence.

In an interview with Christian Solidarity Worldwide (CSW) in 2015, Mukhtar Masih, Shama’s father, said he was committed to getting justice in the case and would not back down despite receiving threats from multiple sources. On receiving news of the sentence he told CSW, "I am not satisfied with this verdict. It is unjust because from the 103 accused only 13 have been punished; five of them have been sentenced to death along with a fine of Rs 200,000, and eight others have been imprisoned for two years each.  From those who have been freed, many were directly involved in this brutal crime and should have also been punished. I appeal to everyone to pray for us so that we may attain justice".

CSW’s Chief Executive Mervyn Thomas said, “We welcome the conviction of those responsible for ther deaths of Shama and Shezad Masih, though CSW does not endorse the death penalty in any circumstance and we note that others who may have had a hand in this crime have not been charged. We urge the government of Pakistan to fulfil its commitment to review the blasphemy laws, and to ensure that procedural amendments are implemented with a view to minimising their abuse and as a step towards full repeal. It is imperative that the government of Pakistan and law enforcement agencies provide adequate security measures and protection for those accused of blasphemy while investigations take place. We continue to call on Pakistan to honour its commitments both in its own constitution and under international law to ensure that justice and equality before the law are guaranteed to all citizens, regardless of their religion or belief."