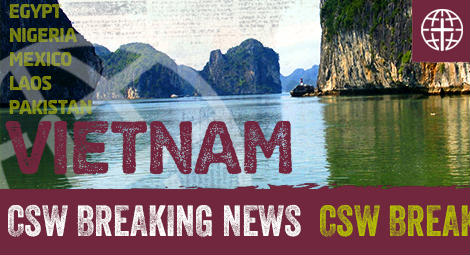 Prisoner of conscience released amid arrests

Pastor Nguyen Cong Chinh, a Vietnamese pastor and former prisoner of conscience, has arrived with his family in the US following release from prison on 28 July. His release, which was conditional on the basis that he leave Vietnam, comes amid a spate of arrests of human rights activists in the country.

Pastor Chinh, a passionate advocate for religious freedom and the rights of ethnic minorities and indigenous peoples, had been serving an 11-year sentence for ‘undermining national unity’ under Article 87 of the Penal Code. His wife, Tran Thi Hong, is an activist with Vietnamese Women for Human Rights. During Chinh’s imprisonment, in which his health deteriorated to a potentially life-threatening degree due to ongoing abuse, Hong was also interrogated, harassed and beaten by the authorities on several occasions.

CSW’s Chief Executive Mervyn Thomas said, “While we welcome Pastor Nguyen Cong Chinh’s release, we oppose the condition that Chinh leave Vietnam in order to secure his freedom, which amounts to involuntary exile. We condemn the targeting by the authorities of both Pastor Chinh and Hong, in particular the harassment and physical abuse they have both endured simply for advocating for the rights of their fellow citizens.”

Chinh’s release comes amid a spate of arrests of activists and religious freedom advocates in Vietnam. Nguyen Bac Truyen, an activist and Hoa Hao Buddhist, was arrested on 30 July and charged with ‘carrying out activities aimed at overthrowing the people’s administration’ under Article 79 of Vietnam's Penal Code. Truyen has been harassed and attacked numerous times in connection with his advocacy for human rights and religious freedom. Three other activists have been arrested on the same charge, including Pastor Nguyen Trung Ton.

All four individuals are being prosecuted in connection with the case of ‘Nguyen Van Dai and his accomplices for anti-state activities’. Lawyer Nguyen Van Dai was arrested in December 2015 with his assistant Le Thu Ha. Dai and Ha have been detained without trial under Article 88 of the Penal Code since their arrest. However, the charge against them has now been changed to the same charge against the other four activists, under Article 79, which carries possible penalties of 12-20 years imprisonment, a life sentence, or capital punishment. No trial date has been announced for any of the detainees.

In a statement on 28 July, the Office of the UN High Commissioner for Human Rights (OHCHR) expressed concern over “the intensifying crackdown in Viet Nam against human rights defenders who have questioned or criticized the Government and its policies,” stating that “human rights defenders should never be treated as criminals who are a threat to national security.”

“CSW joins the UN OHCHR in calling on Vietnam to immediately release all those detained in connection with their exercise of their rights, and to remove the unfounded charges against Nguyen Van Dai, Le Thu Ha, Nguyen Bac Truyen, Pham Van Troi, Truong Minh Duc and Nguyen Trung Ton,” Mervyn Thomas added.