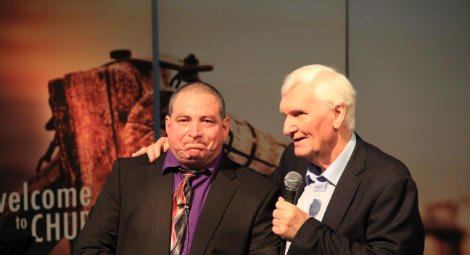 Christian Solidarity Worldwide (CSW) announces with regret and deep sadness the death of our Special Ambassador, the Reverend Stuart Windsor.

Rev Windsor passed away at his home on the morning of 17 September. While the cause of death is yet to be determined, Rev Windsor had recently had an angioplasty after suffering a serious heart attack in July.

Rev Windsor served as CSW's National Director for 19 years before retiring and becoming Special Ambassador. He travelled extensively to visit communities where freedom of religion or belief (FoRB) was being curtailed, often at great personal risk.

Well known in Christian circles, Rev Windsor also had a deep understanding of FoRB.  Amongst other things, he provided expert testimony before both Houses of the United States (US) Congress, for the Office of the United Nations (UN) High Commissioner for Refugees, before the UN Commission of Inquiry on North Korea, and during hearings in the European and United Kingdom (UK) parliaments. In recent years, his work included securing safety for several Pakistani Christian families who were experiencing persecution, and providing expert witness on FoRB for asylum and immigration hearings in the UK and elsewhere.

CSW’s Chief Executive Mervyn Thomas said: "I have worked with Stuart for nearly a quarter of a century. I have known no-one with a more caring and compassionate heart for the suffering than Stuart. He literally worked 24/7 for the cause of religious freedom, and no issue was ever too big or too small for him to take up. Both the human rights and the Christian communities have today lost a giant of a man whose loss will be felt for a very long time to come. It has been an immense honour and a privilege to labour together with him for so long."