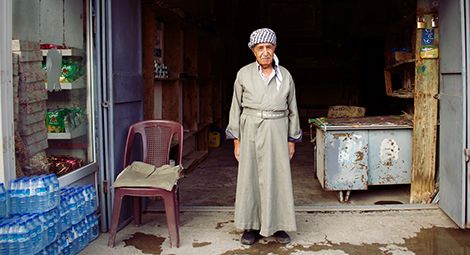 CSW is deeply concerned at recent clashes which have forced hundreds of Christians to flee the town of Teleskuf.

Christian Solidarity Worldwide (CSW) is deeply concerned at recent clashes between the Kurdish Peshmerga forces and the Iraqi Army in the Nineveh Plains of Northern Iraq, which have forced hundreds of Christians to flee the town of Teleskuf.

Local sources have informed CSW that on 24 October, the Peshmerga moved into the Christian town of Teleskuf,  around 15 miles to the north of Mosul, in an attempt to stop the advance of the Iraqi Army, which is supported by  Shi’a Militia known as the Popular Mobilising Forces (PMF).

Hundreds of Christian families were forced to flee Teleskuf for Alqush and other Christian villages in the Nineveh Plains, and many civilians were wounded during the fighting.

The clashes are a continuation of fighting that broke out following a referendum on Kurdistan independence, which was held on 25 September 2017.

Teleskuf fell into the hands of the Islamic State (IS, Daesh) in 2014 and was liberated in 2016. The town was rebuilt with the help of the international community, and in particular the Hungarian government, enabling hundreds of Christian families to return to their homes.

During CSW's fact-finding visit to the Nineveh Plains in August 2017, Yezidi and Christian community leaders expressed concerns regarding the rising tension between the Central Government in Baghdad and the Kurdish Regional Government (KRG). They Informed CSW that the KRG had seized disputed territories, including Kirkuk, the Nineveh Plains and Sinjar, taking advantage of the chaotic situation and deepening sectarian conflict in the rest of Iraq. These territories are religiously and ethnically diverse and include Sunni Arabs, Sunni and Shi’a Turkmen, Assyrian Christians, Yazidis, Kaka’i, Shabak, and other communities.

Religious, political and civil society leaders, and many internally displaced persons (IDPs), shared profound security concerns. All of the community leaders and IDPs who were interviewed suggested that they would only be reassured by some form of Western military presence.

CSW’s Chief Executive Mervyn Thomas said: "Christians and Yazidis have repeatedly asked the international community for support in creating their own nonpartisan security and local administration, but nothing has been done to facilitate this. Instead, Christians and Yazidis have now begun their fourth year living in camps while political parties with militias vie for control of the Nineveh Plains and Sinjar. The emigration of members of minority communities continues as the chances of seeing restored stability are still far away. We call upon the KRG and the central government in Baghdad to cease hostilities immediately and to engage in negotiations to find a political solution to the conflict. It is important that the voices of the people inhabiting the disputed territories of Sinjar and the Nineveh Plains are heard through an internationally organised and monitored referendum. The KRG and the Iraqi central government should ensure that principles of transparency, human rights and equal citizenship are upheld at all times, and that religious minorities are treated fairly during the return and re-building process.”