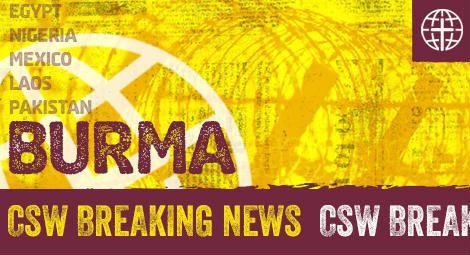 The men, who are members of the Kachin Baptist Convention, were both convicted under the Unlawful Associations Act for their alleged support of the Kachin Independence Army and under the Import Export Act for operating motorcycles without a licence.

CSW's Advocacy Director Joel Edwards said: “This verdict is a serious miscarriage of justice. We urge the authorities in Burma to release Dumdaw Nawng Lat and Langjaw Gam Seng, who have committed no crime. We also call on the international community to raise their case with the Government of Burma as a matter of urgency."

On 24 December 2016, a week after the publication of press reports on the bombing of the Catholic church, the men were taken into military custody and held incommunicado for a month. The Burma Army denies responsibility for the church bombing.

Their forcible disappearance was raised as a matter of concern by members of the House of Commons on 18 January 2017, after an Urgent Question on Human Rights in Burma (Myanmar) was tabled.

According to reports, the prison sentence will take into account time served from the men’s transfer into civilian custody on January 22. Fortify Rights and Human Rights Watch report that the prosecution’s case against them relied on statements signed by the men during their time in military custody, which defence lawyers said had been signed under “severe duress”.

Clashes between the Kachin Independence Army and Burma Army have been ongoing for six years following the collapse of a 17-year ceasefire. The UN Office for the Coordination of Humanitarian Affairs estimates that approximately 100,000 civilians remain displaced by conflict across Kachin and northern Shan states.