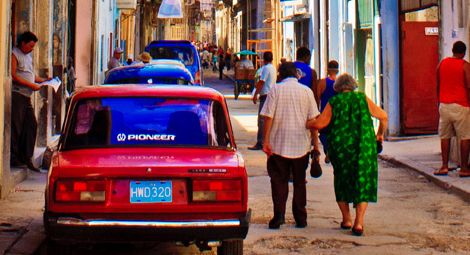 A prominent Cuban advocate for freedom of religion or belief (FoRB), Leonardo Rodríguez Alonso, was detained on 28 February in Villa Clara, and is being held without charge in the Provincial Unit for Investigations in the city of Santa Clara.

Rodriguez Alonso is a regional coordinator for the Patmos Institute, an independent civil society organization that promotes inter-religious dialogue and FoRB for all. He was arrested on his way home from the town of Caibarién, where he was leading meetings with human rights defenders who were discussing responses to a series of FoRB violations affecting Apostolic Movement churches in central and eastern Cuba.

According to Reverend Mario Felix Lleonart Barroso, a founder of the Patmos Institute, Captain Erick Francis Aquino Year, the regional Head of Confrontation (Jefe de Enfrentemiento) dealt directly with Rodríguez Alonso. Captain Aquino Year reportedly told members of Rodríguez Alonso’s family that the government considers the Patmos Institute to be a counter-revolutionary organization, and that if charges are brought against him they will be serious.

Reverend Lleonart Barroso told Christian Solidarity Worldwide (CSW) that the government is unhappy with their work raising FoRB concerns in and outside Cuba, including through the submission of a report by the Patmos Institute to the Universal Periodic Review (UPR) of Cuba at the United Nations.

Church leaders in the central Cuban city of Camagüey and the eastern city of Santiago denounced a series of FoRB violations this week. Apostle Alain Toledano, a leader in the unregistered Apostolic Movement network of churches, reported that government officials in Santiago have banned him and members of his church from buying any construction materials. They have been working to rebuild their church which was arbitrarily demolished in early 2016.

Apostle Bernardo de Quesada, another leader in the same network, complained this week that government officials in Camagüey had interrupted bible studies held in private homes and attempted to intimidate the homeowners into stopping their religious activities. In addition, Apostle de Quesada said that government inspectors from the Physical Planning Department attempted to enter his family’s property, where the church meets, while he and his wife were out of the country.

In a statement to CSW, he said: “…on 8 January 2016 our church was completely demolished. Today we use collapsible pipes and screws to prop up old canvases in order to provide some cover from the sun to the hundreds of people who meet here every week. Are the barbarities that have already been committed by this inhuman and anti-God regime against the Church in Camagüey not enough? What bothers them more: the torn, improvised tent that we meet under or the hundreds who meet there every week and are physically and spiritually freed from wounds and enslaving ideological strongholds?"

Anna-Lee Stangl, Americas Team Leader at CSW, said: “We are deeply concerned for the well-being of Leonardo Rodríguez Alonso, whose only ‘crime’ is to speak out on behalf of those who are suffering harassment and discrimination because of their religious beliefs. It is telling that the Cuban government considers the peaceful defense of freedom of religion or belief to be a ‘counter-revolutionary’ activity. We call on the Cuban government to release Leonardo immediately, to cease its harassment of Apostolic Movement churches, and to allow them to worship peacefully.”