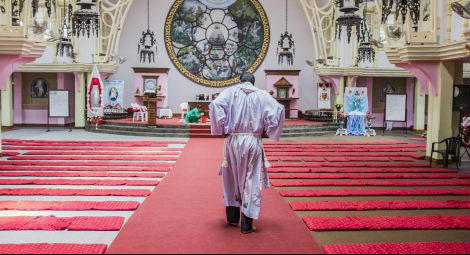 St Joseph’s Catholic Church in Kohalpur, Banke District in Nepal was set on fire at around 1am on 5 May by unidentified arsonists.

Local sources have informed CSW that people living in the vicinity of the church were told by the perpetrators to go into their homes and not to come out. Witnesses said that between eight and ten unidentified men then broke into the church, splashed petrol around it and set the church ablaze.

St Joseph’s church is a new parish with an estimated 20 parishioners. No one was injured in the arson attack, but the interior of the church has been entirely destroyed; only the outer structure remains standing.

The Federation of National Christians in Nepal (FNCN) issued a press statement demanding a response from the government of Nepal and a prompt investigation to bring the perpetrators to justice. The FNCN condemned the ‘inhuman act’ as a direct assault on religious minorities in Nepal, and one that would ‘disturb mutual harmony’. The statement also pointed out that the government must champion the basic fundamental freedoms enshrined in the constitution and guarantee that all human rights are protected. The FNCN also called on the government to protect the interests of Christians so that they may feel safe to practise their religion.

Prakash Kadhka, a human rights defender in Kathmandu, said: “The heinous act of desecrating a holy place is a direct attack on the Catholic Church. The sanctuary, altar and the Eucharist are central to our worship. This hateful act is cowardly and send out an uneasy message [sic] that Christianity is not welcomed in this place. We are keen to build peace and work towards justice. Acts that provoke a culture of hate and fear will not bring about lasting peace and durable solutions.”

CSW’s Chief Executive Mervyn Thomas said: “We are deeply concerned and saddened by the arson attack on St Joseph’s Church, a place of worship and one where people gather to seek refuge, comfort and relief. As a newly appointed member of the United Nations Human Rights Council, Nepal has pledged to promote human rights in Nepal and around the world, including freedom of religion or belief. We urge the government of Nepal to uphold its commitments and to ensure a thorough, swift investigation into this case and the prosecution of those responsible for this attack.”