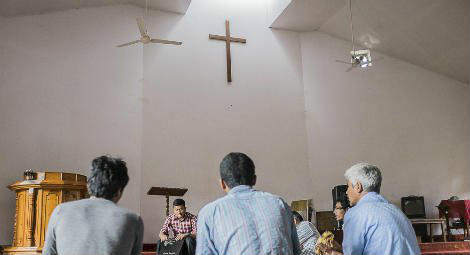 Four Christian Churches in Nepal have been attacked over a five-day period by unidentified assailants. The attacks, which began on the 9 May, targeted Mahima Church in Dhangadhi, Emmanuel Church in Kanchanpur and Emmanuel Church Budor in Doti, Western Nepal. Hebron Church in Panchthar, Eastern Nepal was also targeted.

Although no-one was killed in the attacks, these developments appear to show a worrying increase in hostilities towards Christian groups in Nepal.

On 9 May, Hebron Church in Hilihang Rural Municipality, Panchthar was set on fire at night. The church, which had concluded its youth conference earlier that day, was partially damaged in the fire; the pulpit, carpet and a number of pieces of furniture were damaged or destroyed. No one was in the church at the time of the attack.

At 10pm on 10 May, Emmanuel Church, Doti was set on fire while Pastor Shyam Thapa was in his residence at the back of the church. He discovered the front of the church was on fire. With the help of local police the fire was put under control and extinguished, although this could not be done before the fire caused significant damage to the door, furniture and electric wiring of the building.

The following day, on 11 May, Emmanuel Church, Kanchanpur was set on fire. No parishioners were present inside the church during the arson attack, which was carried out at night by unknown assailants. Led by Pastor Dhirendra Rana, the church was started two years ago and served a congregation of 65 believers. The church suffered from significant structural damage as the main gates and windows were destroyed. Local sources have confirmed that police have been sent to investigate the attack.

Mahima Church, Dhangadhi was bombed by an unknown assailant at 11pm on 13 May. With a congregation of between 200 and 400 parishioners, led by Pastor Birendra Kariya, a member of the National Churches Fellowship of Nepal (NCFN), the Church, which has operated for about 10 years, was partially destroyed after a bomb was thrown through a window that was also broken. Although police attribute the attack to the Biplab Maoist group, local sources cite threats by a Hindu extremist group over the past few weeks as a possible motive. Police investigations are ongoing.

Pastor Tanka Subedi, founding member and chair of Dharmik Chautari Nepal and Religious Liberty Forum Nepal (RLF) said: “The Nepalese government is a democratic government, and should provide guardianship to all religious groups equally. I call on the government to ensure the security of religious minorities, support rebuilding churches that are damaged, release all those held as a result of their belief and maintain an environment in which the preaching and practice of one's faith is an exercise of their fundamental human rights."

In a joint press release on 14 May, the National Christian Fellowship of Nepal (NCFN) and Nepal Christian Society (NCS) condemned the attacks and stated that Christians are falsely being accused of conversion, leading to legal prosecution. Calling on the government to adhere to Nepal’s international obligation, the parties are pressing for the injustice to be addressed.

CSW’s Chief Executive Mervyn Thomas said: “This new wave of attacks brings the total amount of Christian churches attacked in Nepal up to five in the space of just over a week. We are incredibly concerned that these attacks represent a stark decline in the ability of Christians in Nepal to practice their faith. We urge the Nepalese government, as a newly appointed member of the United Nations Human Rights Council, to bring the perpetrators of these crimes to justice, as well as uphold its commitment to promote and protect human rights, including the freedom of religion or belief, both in Nepal and around the world.”