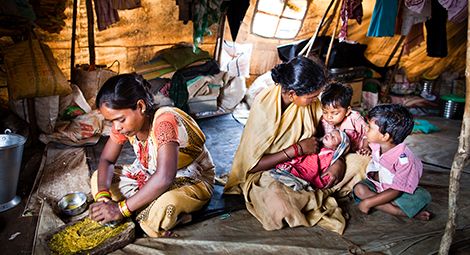 John Dayal is a writer and human rights activist, and one of our long-term partners. His courage and perseverance in speaking up against injustice - despite the harassment and death threats he’s received - are truly inspiring.

And India needs people like him more and more. One of the biggest threats to religious freedom is the rise of far-right Hindu nationalism. Hate speech by Hindu extremists regularly incites discrimination and violence against religious minorities, and last September three Christians in Jharkhand State were tragically lynched by a Hindu nationalist group after being accused of cow slaughter. Meanwhile, several states have passed legislation that criminalises converting to another religion. Find out more about India at csw.org.uk/india

Pray for comfort for the families of the two men who died in the lynching in September, and for physical and emotional healing for the surviving man, Philip Horo.

‘Even though it was a humiliating moment for us as it all happened in a public area...we will continue to share our faith.’ Praise God for the determination of Leo Johnson and his wife Jenifa, who were threatened and intimidated after spending a day giving out Christian tracts last September.

Thank God for the countless courageous human rights defenders we know, such as John Dayal, who put themselves at risk to speak up for justice.

Last year two men were released on bail after spending over 10 years in prison for a crime they did not commit. A total of seven Christians were falsely accused of the 2008 murder of a Hindu monk; the murder sparked the worst anti-Christian violence in India’s history. Give thanks that the remaining five men were granted bail in November last year.

‘My help comes from the Lord, the Maker of heaven and earth. He will not let your foot slip – he who watches over you will not slumber.’ (Psalm 121:2-3) Pray this verse over India today.

Seven Christian families were forced to flee their village in Jharkhand State last June after receiving threats from Hindu fundamentalists. Three other families were forcibly converted to Hinduism. Pray that they would be able to live in safety, peacefully practising their faith.

Almighty God, we know that your love reaches to all corners of the earth. We ask you to stretch your hand of protection over the life of every person who experiences intimidation, harassment or threats from extremists. We also ask for lawmakers’ hearts to be changed and anti-conversion laws to be repealed, so that all India’s citizens can live out their beliefs in peace. Amen.