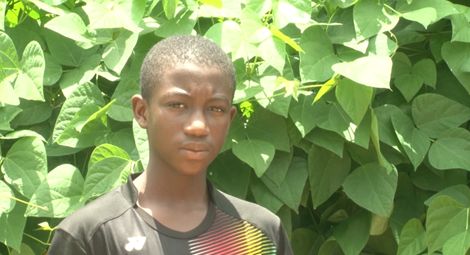 Seth, who escaped after being abducted from Bethel Baptist High School

Safety or school: an impossible choice

'I was sleeping, I dont even know what happened, I just woke up and saw a gun on my chest. The man told me that I should just stand up and follow him.'

In the early hours of 5 July 2021, 13-year-old Seth was taken from his bed at Bethel Baptist High School and marched into the bush. In the confusion Seth managed to slip away from his abductors – but 135 other children were not so fortunate.

They were forced to march for 17 hours to the armed gang’s camp, according to 13-year-old Emmanuel, one of 28 children released two weeks later after their parents had paid a significant ransom. They had been promised that all the children would be freed, but the abductors demanded more money. Seven children escaped, and 15 more were released after a further payment. At the time of writing 85 children remain in captivity.1

Since 2020, there has been a dramatic rise across Nigeria in abductions for ransom, largely carried out by armed men of Fulani ethnicity, with mass kidnappings from schools occurring frequently in Kaduna, Katsina, Niger and Zamfara states in particular. And the situation is getting worse.

In some of the most infamous kidnapping cases, like that of the 279 Chibok girls in 2014, and Leah Sharibu in 2018, girls were taken by terrorist groups (Boko Haram and ISWAP) who are ideologically opposed to Western education. However, the motivation for the current attacks is to extract huge ransoms – often to purchase sophisticated weaponry – and this represents a new danger on a different scale.

Nigerian students are becoming commodities to be taken en masse and bartered. Christian-owned schools have been particularly targeted, with churches and families being driven further and further into poverty by the enormous ransom demands. However, the lack of effective government action has meant this crime - which is low risk and high return for the perpetrators - is now affecting every school, including Islamic ones.

In Niger state on 29 May, 136 students were taken from Salihu Tanko Islamic school in Tegina. The families sold everything, including the school from which they were taken to raise the ransom. However, the man who delivered the ransom was himself taken, along with the money, and the kidnappers demanded more. The students were finally released in August.

An attack on a generation

The future prospects of an entire generation in central and northern Nigeria are under threat, with parents left in the impossible position of having to choose between their children’s education and their safety.

‘[We] the Christian community in the north are facing a lot of troubles... We see kidnappings going on, people being killed in their sleep... We didn’t know it could come to this point.’ – Father of student Seth

Kidnapping for ransom is now a fast-growing criminal enterprise, and is the latest of a series of unaddressed security challenges, which include Boko Haram in the north-west and militia violence in the centre and south.

If Nigeria is allowed to descend into permanent instability, the consequences will be catastrophic not only for the region and continent, but also for the international community, as it could cause an unprecedented refugee crisis while providing a haven for terrorist organisations.

How can we respond?

We must urge the international community to challenge Nigeria’s leaders before it’s too late.

On Thursday 28 October at 1pm we will protest outside the Nigerian High Commission in London – placing children’s shoes at the entrance, mirroring the left-behind shoes of abducted children fleeing their captors.

Find out how to join us at csw.org.uk/events

1 Since this article was published, there have been further developments. As of 1 November 2021, all but four have been released.