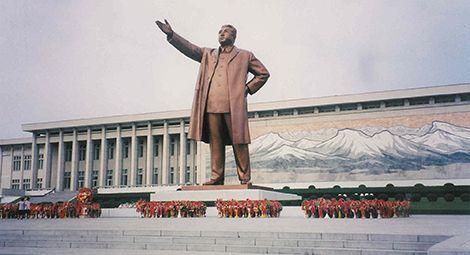 North Korea is the world's most secretive and isolated state, with one of the worst human rights records. There’s no religious freedom in the country and anyone who expresses an opinion which differs from that of the authorities faces severe punishment. Thousands flee the country each year, risking execution if they’re found out and repatriated. However, the pandemic has brought about an unexpected opportunity: North Korea has declared that it won’t accept returned defectors for fear of COVID-19 being transmitted. This means there’s a chance for them to be sent to safety in South Korea instead. (This situation may change after we go to print.) Find out more at csw.org.uk/northkorea

Followers of all religions face severe repression but Christians, who are viewed as a ‘hostile class’, are particularly targeted. Those caught in possession of a Bible have been known to be executed. Pray for protection for the country’s Christians.

Pray that North Koreans who flee the country would be allowed to settle in South Korea. In the past, defectors who have been forcibly returned have been sent to prison camps and have even faced execution.

Hundreds of thousands of North Koreans are held in inhumane, unsanitary prison camps; many are detained for their religious beliefs. Since the pandemic, their situation has become even more perilous - social distancing and basic hygiene are impossible in these camps. Pray that they would be protected from the coronavirus.

Over the past few years there have been some interactions between the leaders of North Korea and the US, but little discussion of human rights. Today pray that other world leaders would speak out against the regime, and that Kim Jong-Un would have a change of heart.

'He reveals the deep things of darkness and brings utter darkness into the light.' (Job 12:22) Pray that the full truth of the situation in North Korea would be uncovered, and that the nation would be set free.

Lord, we lift to you the nation of North Korea today. Move powerfully in the country and soften the hearts of the leaders. May they recognise the inherent dignity of their citizens and grant them the freedoms they deserve. Amen.