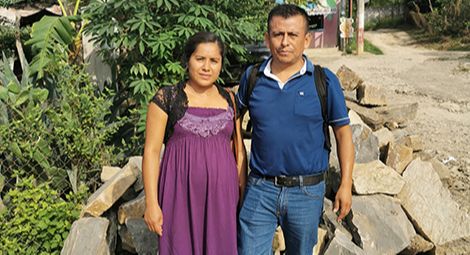 ‘There’s a lot of discrimination for belonging to a religion different from the majority, especially in Hidalgo. The situation is difficult.’ - Uriel Badillo Lara

Despite strong constitutional protections for freedom of religion or belief, religious discrimination is particularly prevalent in indigenous communities. In the states of Hidalgo, Oaxaca, Guerrero and Chiapas local authorities have sought to impose religious uniformity in their communities justified under the Law of Uses and Customs, which allows indigenous communities to maintain their own social and cultural norms. Find out more at csw.org.uk/mexico

In July 2019, Uriel Badillo Lara and his wife Adelina Simón Pozos were forced to leave their home in Hidalgo State as a result of the ongoing harassment they had been experiencing since October 2018 on account of their religious beliefs. Pray that they will soon be able to return home.

Six Protestant Christian families from the King of Kings United Pentecostal Church of Mexico in Chiapas State had their electricity cut off in July 2020, and continue to face harassment. Pray that they will be able to practise their faith free from discrimination and persecution.

Pray for two Protestant families in La Mesa Limantitla village, Hidalgo State who were forced to sign an illegal agreement renouncing their right to hold religious services, in order to have their access to water and other essential services restored. They risk being cut off again if they cannot pay the remainder of the fine that was part of the agreement.

Pastor Aarón Méndez Ruiz and Alfredo Castillo de Luna were forcibly disappeared in August 2019, after standing up to an organised criminal group that attempted to kidnap Cuban asylum seekers from the shelter where the men worked. Pray for news of their whereabouts and protection over all the religious leaders working in migrant shelters.

Pray for all those suffering discrimination in the Huasteca region of Hidalgo State where denying access to water and electricity services for religious minorities, blocking religious minority children from attending school, arbitrary detention and forced displacement are commonplace.

‘The Lord is my rock, my fortress and my deliverer; my God is my rock, in whom I take refuge, my shield and the horn of my salvation, my stronghold.’ (Psalm 18:2) Pray this verse over those facing persecution in Mexico.

Heavenly Father, we lift up to you the religious minorities in Mexico who are facing persecution and discrimination. We ask you to soften the hearts of those in power in the local authorities where this is occurring, so that they no longer seek to impose religious uniformity. Amen.