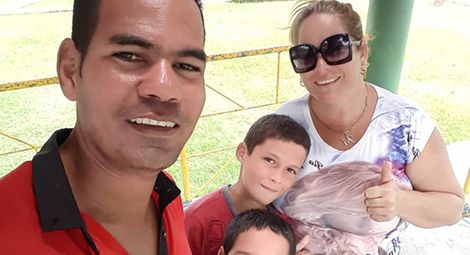 Social media platforms such as Facebook are a great way for us to stay connected to the people we care about, enabling us to share messages and photos quickly and easily. It’s especially been a lifeline for many who would otherwise be feeling even more cut off during the COVID-19 pandemic.

But in Cuba, social media has a darker side. State security uses the internet to monitor closely anyone who dares to speak out about the government’s human rights abuses. Fake social media accounts are also used to spread lies and disinformation about courageous activists and religious leaders. Find out more at csw.org.uk/cuba

A blog believed to be run by Cuban state security has published articles about Reverend Alain Toledano Valiente, a national leader of a network of independent churches, accusing him of domestic violence, of rape, of embezzlement – all completely invented claims. Pray that the truth would be known and these claims would be ignored.

Even more disturbingly many of the articles target his daughters, some of whom are minors, with truly disgusting accusations. Understandably, this has caused them anxiety and stress. Pray for them to have the peace of God, which transcends all understanding (Philippians 4:7).

‘I committed no crime; it had to be manufactured...They [the government] want me to stop being a pastor.’ Pray for a fresh outpouring of courage and strength for Alain in the face of the vicious smear campaign against him.

‘Though the arrogant have smeared me with lies, I keep your precepts with all my heart.’ (Psalm 119:69) Thank God for Alain’s courage in continuing his pastoral work despite the government’s attempts to silence him.

Last May, an individual was studying the Qur’an in their home with a group of fellow Muslims when two State Security officers appeared. At a police summons the following day, they were threatened that if they held meetings of this kind again they would be punished for the crime of ‘association to conspire and commit crimes’. Pray that they would be free to practise their faith with no further harassment.

Pastor Karel Parra Rosabal was arrested in January this year on trumped-up criminal charges, but the police told him he was being arrested ‘so that you learn that illegal churches in Cuba are not allowed.’ The government has refused to register Apostolic Movement churches like Karel’s, effectively making them illegal. Pray for a complete end to this kind of intimidation and harassment.

Heavenly Father, thank you for the nation of Cuba and all your children there. As you commanded us, we pray for the persecutors: that they would have a change of heart and would turn from injustices they are committing. For those who feel they have no choice, we ask you to provide them alternative income sources. We lift them to you in the name of your merciful and loving son Jesus. Amen.