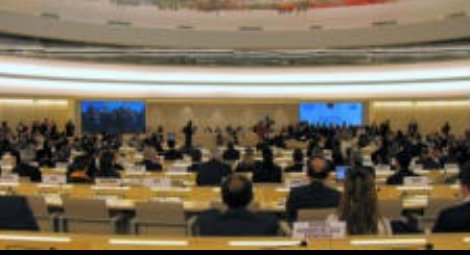 CSW's oral statement on migrants non-refoulement and Eritrean refugees at the 29th session of the UN Human Rights Council.

Jubilee Campaign together with Christian Solidarity Worldwide (CSW) welcomes the report of the Special Rapporteur on Migrants on the EU border management, and commends Professor Crépeau for his proposal to establish a human rights based migration framework. Today we would like to raise concerns about the lack of commitment of certain countries to provide asylum to Eritrean refugees and asylum seekers fleeing persecution.

The human rights record of Eritrea remains one of the most appalling in the world. According to the new report of the Commission of Inquiry on Eritrea, some of the systematic and extensive human rights violations may amount to crimes against humanity. In addition, concluding observations of the Committee on the Rights of the Child, published last week, highlighted that Eritrean children from unrecognised religious denominations are harassed, persecuted and denied official identity. Tens of thousands of Eritreans continue to be detained without charge or trial in life threatening conditions, in prisons where torture remains common.

Despite a governmental shoot to kill border policy, the risk of being held hostage by Bedouin people traffickers, being kidnapped from refugee camps in Sudan, or being executed by Daesh (Islamic State), at least 30,000 Eritreans left their country by boat and entered Italy during 2014. Eritrea has become the largest refugee-producing country in the world on a per capita basis. We remain concerned that despite the evident and large-scale human rights violations underway in Eritrea, such as torture, rape and indefinite detention, several EU countries continue to treat Eritreans as economic migrants and return them to Eritrea.

We urge member states to recognise the validity of claims by Eritrean refugees and asylum seekers. We urge countries to ensure that the principle of non-refoulement is respected and refugees are not returned to any countries where their lives are threatened. We also encourage member states to strengthen their joint responses to the global refugee crisis and to establish human rights based migration responses where the dignity and safety of migrants remain at the forefront of the efforts.