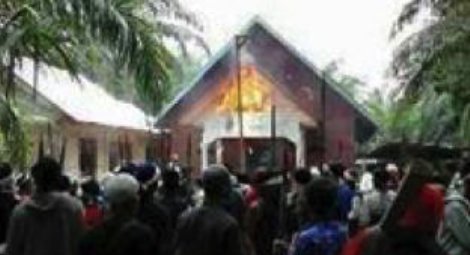 One dead and church burned in Aceh

A man was killed and a church burned down in violent clashes in Aceh Singkil, Indonesia, on 13 October.

Violent clashes broke out after a demonstration on 6 October by an Islamic youth group demanding that the local government tear down a number of churches that they claimed had been built illegally without permits. They threatened to tear down the churches themselves if their demands were not met.

The local government agreed to demolish at least 13 churches in Aceh Singkil and force the churches to register for new permits to build churches. They also decided to force the Christian community to adhere to a 1979 agreement which stated that only one church and four chapels can be built in Aceh Singkil. However the group took matters into their own hands. After the first church was burned down, they clashed with Christians at another church.

The police and the military were deployed to restore order and the attack on the churches was condemned by President Joko Widodo.

The organisation Solidarity of Victims of Freedom of Religion and Belief Violence (SobatKBB) stated that the incident in Aceh must not be viewed as an isolated incident but is the result of discriminative policies against churches which have been applied since 1979. Furthermore, the government’s 2006 Joint Ministerial Regulation on Houses of Worship has complicated the question of legality for houses of worship built before 2006.

Palti Panjaitan, National Coordinator of SobatKBB, said that the government’s focus must not only be on halting the violence but also on conflict resolution and the repeal of discriminative legislation: “Without any serious effort, violence in Aceh will keep recurring. Christians practically live without any protection, which keeps them in fear of further attack and violence.”

Christian Solidarity Worldwide’s (CSW’s) 2014 report, Indonesia: Pluralism in Peril, highlighted “the inaction and at times complicity of the local, provincial and national authorities” as a factor fuelling religious intolerance in Indonesia. Recommendations to the Indonesian government include the repeal of discriminatory legislation and ensuring that violations of religious freedom are properly investigated and the perpetrators are brought to justice.

CSW’s East Asia Team Leader Benedict Rogers said, "This tragic attack is the latest in a series of incidents in recent years, in different parts of Indonesia, which threaten Indonesia's tradition of religious pluralism and tolerance. It is vital that the Indonesian government act to bring the perpetrators to justice and prevent further violence."