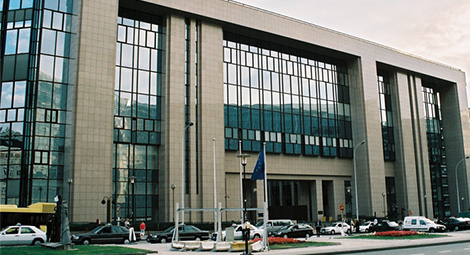 Christian Solidarity Worldwide’s (CSW) new campaign, Defend the Defender, was profiled at an event in the European Parliament (EP) in Brussels on 7 March, hosted by Peter Van Dalen (MEP), Co-chair of the Parliamentary Intergroup on Freedom of Religion of Belief (FoRB) and Religious Tolerance. The campaign aims to raise awareness of the challenges faced by human rights defenders (HRDs) in South and Central Asia.

Speakers at the event included HRDs from India, Bangladesh, Pakistan and Kyrgyzstan, who face challenges in their work advocating for human rights, including FoRB. The delegation will also address a side-event at the United Nations (UN) Human Rights Council, co-hosted by CSW, on 14 March.

As part of the Defend the Defender campaign, CSW has published a report entitled Radicalism and Red Tape: The growing restrictions on advocacy for religious freedom in South Asia and Central Asia, which examines the challenges faced by HRDs in six countries in South and Central Asia (Bangladesh, India, Kyrgyzstan, Nepal, Pakistan and Sri Lanka). It also includes recommendations for the governments of these countries, and the international community, to secure better protections for HRDs.

At the European Parliament event, Nehemiah Christie, a Christian religious leader from Tamil Nadu state in southern India, gave examples of the increasing opposition advocates for religious freedom in India have faced under the BJP government, including “smear campaigns which present us as ‘enemies of the State’ and ‘anti-nationals’.” As a result, he stated “the job of a human rights defender is not an easy one.”

To bring an end to attacks on HRDs, she argued that “the government of Bangladesh needs to be pressured to properly investigate attacks on human rights defenders and to bring perpetrators to justice.”

The severity and specificity of the threats faced by FoRB defenders is under-documented and under-reported.

As part of the research for the new report, CSW hosted a regional consultation in July 2017 attended by the UN Special Rapporteur on the Situation of Human Rights Defenders, Michel Forst, and 40 FoRB defenders from across the six profiled countries. The HRDs revealed that they regularly receive threats of death, rape and sexual assault as well as being the victims of hate speech, intimidation, abuse and violence.

The report concludes that HRDs promoting FoRB in South Asia and Central Asia are increasingly being stifled by radical violence and government 'red tape' restricting their freedom of expression, association, movement, religion and access to funding, and that “unless these countries urgently establish a framework to protect HRDs, in line with international law, there will be a downward spiral of human rights and democracy”.