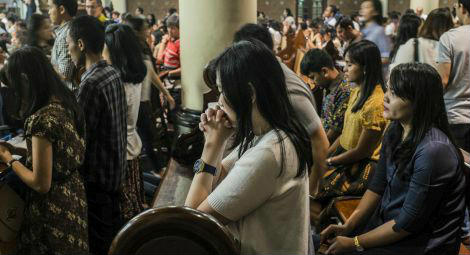 Three churches in Indonesia’s second-largest city, Surabaya, were hit in bomb attacks which killed 13 people and injured dozens on 13 May. The bombings are described as the worst terrorist attack in Indonesia since 2005.

According to news reports, one family carried out the attack, although the Islamic State (IS, Daesh) has claimed responsibility. It is alleged that the family belonged to an Indonesian IS-inspired network, Jemaah Ansharut Daulah (JAD) and may have spent time with jihadis in Syria.

Diponegoro Indonesian Christian Church was attacked by a woman and two girls aged nine and 12. Strapped with bombs, Puji Kuswati Iahir, Fadhila Sari Iahir and Famela Rizqita blew themselves up at the church. They were believed to be the mother and two sisters of the young men who attacked Santa Maria Catholic Church.

Dita Oepriarto lahir, a man believed to be the father, drove a car laden with explosives into the grounds of Surabaya Centre Pentecostal Church. The second and third attacks are believed to have happened five minutes apart.

A police headquarters in Surabaya was also targeted in a suicide bombing on 14 May. According to news reports, the attack killed four people and injured 10.

Benedict Rogers, East Asia Team Leader at CSW said: “We condemn these terrible attacks in the strongest possible terms and express our deepest condolences for the victims and their grieving families. The idea that an entire family could be so radicalised by a cruel ideology as to conduct such horrific attacks, including using their under-age young daughters as suicide bombers, is abhorrent. We urge the government of Indonesia to urgently review its approach to deradicalisation and to make it a priority to address the threat posed by over 600 jihadis returning to Indonesia after fighting in Syria. The government should also see the connection between terrorism and growing religious intolerance in Indonesia, which come from the same ideological root cause. CSW has highlighted the increasing threats to Indonesia’s tradition of pluralism over recent years, and today’s tragedy must be a wake-up call for the world. Urgent action is needed to counter extremism and strengthen the promotion and protection of freedom of religion or belief.”

In recent years Indonesia’s pluralistic tradition of ‘Pancasila’ has come under threat. Despite President Joko Widodo’s attempts to distance the government from radical Islamists and to remove some of the previous government’s apparent complicity with intolerant groups, religious intolerance has risen across the archipelago. CSW’s latest report on freedom of religion or belief (FoRB) in Indonesia, highlights that Christians, Ahmadiyya and Shia Muslims, as well as other religious minorities and moderate Sunni defenders of pluralism are increasingly fearful of the rise of radical Islamism and its influence on politics and society in the country.