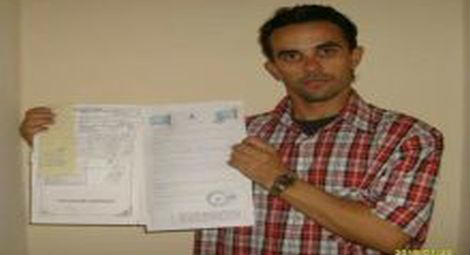 Reverend Yiorvis Bravo, a national leader of the Apostolic Movement in Cuba, has been banned from travelling as the government continues to target church properties for expropriation. He was notified on 28 June that he is banned from traveling outside the country because he refuses to pay the government rent on a property that the authorities arbitrarily confiscated from him in 2013.

An official letter which Reverend Bravo received on 28 June, the day before he was due to travel to Peru to participate in a course on Leadership, Democracy and Multi-media communications, states that his refusal to acknowledge the government as rightful owner of his property and his failure to pay rent to the authorities has resulted in debts that prevent his leaving Cuba for any reason. The letter refers to Reverend Bravo’s status as ‘a permanent tenant of the state’.

Reverend Omar Gude Perez, a former prisoner of conscience, transferred the property which functions as a family home, the national centre for the Apostolic Movement and a church, to Reverend Bravo when Reverend Gude and his family accepted asylum in the United States in 2013. In September 2013, a court summarily nullified the transfer.

Reverend Bravo refused to vacate the property and a few weeks later Housing Ministry Officials offered to allow him to stay in the building if he paid US$300 per month, an amount 15 times the average annual salary in Cuba, and submitted all activities to the government in advance for approval. Reverend Bravo refused these conditions and continues to maintain that he is the legal owner. A request for precautionary measures has been filed on his behalf at the Inter-American Human Rights Commission.

Christian Solidarity Worldwide (CSW) has received numerous reports that the government has been targeting more church properties in a similar way across the country since new legislation came into effect in early 2015; informing the churches that the property is being expropriated by the state and that their status has changed from owners to tenants. The most prominent case has been that of the Maranatha First Baptist Church in Holguin, which was informed that their property was being expropriated in May.

Reverend Amado Ramirez told CSW recently that contrary to reports circulating in the media, there has been no change to the legal status of the church property, which is affiliated with the Eastern Baptist Convention: “We are sorry to tell you that this news is totally false, as up to today neither we, nor our [Baptist Convention] president have been notified that the property will not be confiscated. At the same time, it is worth clarifying that if even if news of this magnitude is made public, it implies a legal process and not just a verbal communication. It seems strange to us that this news is circulating when we were told that an answer would probably take months as it is now the affair of the Council of Ministers whose schedule is completely full and [the church] is just one matter among many others. It is the Council of Ministers that will decide and will give legal notice at that point. In the meantime, we continue to pray.”

CSW’s Chief Executive Mervyn Thomas said, “We have repeatedly raised concerns about the growing number of churches, registered and unregistered, which have been informed of the arbitrary expropriations of their properties by the government in recent months. The current situation of Reverend Bravo is a clear demonstration that the strategy behind these expropriations is to exert more control over religious leaders and bodies of faith. The expropriation of his property has been compounded by punishing him for refusing to pay an exorbitant rent to the government on property which is rightfully his. We continue to condemn the illegal expropriations of church properties and call on the Cuban government to rescind these orders of confiscation immediately. Furthermore, we call on the Cuban authorities to lift any restrictions on travel for Reverend Bravo without delay.”

1.        New legislation, Legal Decree 322: the General Law on Housing, announced on 5 September 2014 and which came into force in 5 January 2015,  has reportedly been used by government officials to claim the right to seize church properties and to force the churches into the role of paying tenant. Cuban lawyers have told CSW that while the law which is meant to regulate private properties, mostly homes, and enforce zoning, it does not specifically mention religious groups but government officials have claimed that it gives the authority to expropriate property when they deem ‘necessary.’ One legal expert linked to the Cuban Council of Churches and speaking anonymously told CSW that churches of all denominations and in multiple provinces are being affected. More information on the law can be found here.

2.  Copies of the official letter received by Reverend Bravo banning him from travel are available on request. In the letter, Reverend Gude is referred to as Omar Gude Ruiz as, while he was in prison, the Cuban government rescinded a legal name change made years before to take his stepfather’s name.