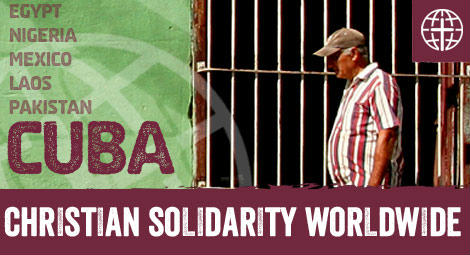 Cuban authorities were forced to halt demolition of an Assemblies of God church in the city of Santiago de Cuba on 28 October when peaceful protestors, including the denomination’s regional head, held a spontaneous sit in at the church.

The protestors had taken part in an unauthorised march through the city and a peaceful demonstration at the local Cuban Communist Party (CCP) offices to protest ongoing government confiscations and demolitions of church properties.

Approximately 500 Christians reportedly joined the march. Simultaneous protest marches were held in the cities of Guantanamo and Contramaestre.

Church leaders in Santiago told Christian Solidarity Worldwide (CSW) that the unprecedented march was organised by the regional Assemblies of God leadership to protest a wave of government expropriations of church property which began earlier this year.  The protestors were gathered in front of the CCP offices, singing and praying, when they learned that an order had been given and demolition had begun on an Assemblies of God church. Pastor Fausto Polemo, the leader of the church, was informed earlier this year that his church was to be confiscated and he was prohibited from holding any more services.

The protestors marched to the church, located on Calle Marti, where they found that demolition had already begun and the walls had been knocked down, despite the protests of the owner of the property. They gathered under the roof which was still resting on the frame of the building and which had not been destroyed. They then told the authorities that if they wished to continue the demolition, it would have to be carried out with them inside.

CSW sources said that the march was part of wider response by the Assemblies of God denomination to a general crackdown on and expropriations of church properties which appear to be linked to the implementation of new legislation in January.

Legal Decree 322 gives sweeping powers to the authorities to confiscate property at their discretion and CSW has received reports from numerous denominations that the law has been used to target scores of churches, including historic properties, across the island. The Assemblies of God leadership also sent a letter to Raul Castro declaring their refusal to accept the expropriation of any of their churches or chapels, accompanied by a petition with 23,739 signatures, which was amassed in five days.

CSW’s Chief Executive Mervyn Thomas said “We stand with the Assemblies of God denomination in Cuba and every other denomination that is fighting the illegal expropriation of their properties by the Cuban government. The courage of these Christians in Santiago, who despite the risks dared to march in solidarity in support of religious freedom and then put their bodies between Pastor Polemo’s church and the demolition equipment, is to be commended. We now call on the international community to stand in solidarity with them as well and to press the Cuban government to repeal Legal Decree 322 and to cease its attacks on churches across the country.”