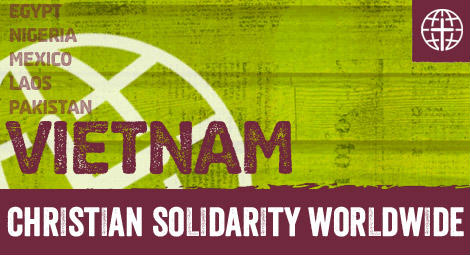 Vietnamese Christian human rights lawyer Nguyen Van Dai was detained on 16 December while preparing to meet European Union delegates to the EU-Vietnam human rights dialogue in Hanoi this week. Dai has been detained for “spreading propaganda” under Article 88 of the Penal Code.

On 9 December CSW reported that Nguyen Van Dai had been assaulted along with three of his friends on 6 December after attending a conference organised to educate the citizens of Nghe An about their rights, including the right to freedom of religion or belief, as guaranteed in the Vietnamese Constitution.

Dai was reportedly taken into police custody at his home on 16 December as he prepared to leave for a meeting with EU representatives in Hanoi for the annual human rights dialogue between the EU and Vietnam. A statement by the Ministry of Public Security said Dai was detained for “spreading propaganda against the state” (Article 88).

This is a charge commonly leveled against activists and dissidents in Vietnam and can carry a lengthy jail term. Lawyer Dai, a well-known defender of human rights and religious freedom, previously served a four year prison sentence after being found guilty under the same article. Fellow activists and supporters have used social media to call for his release.

Also this week in Vietnam, Protestant pastor and activist Nguyen Trung Ton was arrested in a Thanh Hoa Province, reports Vietnamese rights organisation Defend the Defenders. Pastor Nguyen Trung Ton is a pro-democracy activist and religious freedom defender. In 2011 he was arrested and charged with conducting activities against the state. He was released in 2013. According to the Vietnam Human Rights Center, Pastor Ton and lawyer Nguyen Van Dai were both prevented from attending a ceremony on 5 December commemorating International Human Rights Day.

CSW Chief Executive Mervyn Thomas said, “We are deeply concerned by the detention of lawyer Nguyen Van Dai and Pastor Nguyen Trung Ton, who have both advocated for the right to freedom of religion or belief for Christians and other religious communities in Vietnam. We further note that these detentions took place in the same week that the EU and Vietnam held their annual human rights dialogue. These detentions underscore the fact that despite some improvements in the level of religious freedom and the registration of new groups in the past few years, citizens are still not free to fully exercise their human rights and to advocate for the rights of others. We call for the immediate release of Mr Dai and Pastor Ton, and urge the Vietnamese government to respect and protect the right to freedom of religion or belief and other human rights in Vietnam.”