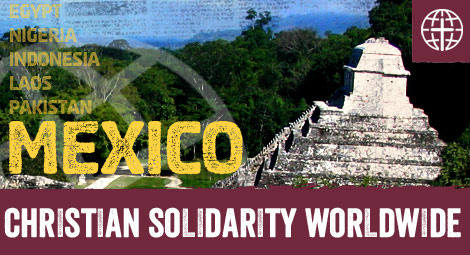 Nine protestant families were forcibly displaced because of their religious beliefs from their village in Chiapas, Mexico on 4 January.

Armed village leaders, led by Village Commissar Reynaldo Jiménez Hernández and Municipal Agent Francisco Jiménez Santiz, attempted to force the victims to renounce their religious beliefs. When they refused to do so they burned their homes in Gabriel Leyva Velázquez, Margaritas Municipality, forcing them to flee.

The group from the Tojolabal indigenous group, comprising nine men, ten women and 14 children, had been under pressure to renounce their Protestant beliefs since April 2015, according to Luis Herrera of the Coordination of Christian Organisations in Chiapas.

Herrera told Christian Solidarity Worldwide (CSW) that on 15 December 2015, village leaders imprisoned some of them and held an assembly at which they called each Protestant individual to present themselves and sign a document confirming that they had renounced their religious beliefs and “given evidence” that they had separated themselves from the Roman Catholic Church. Seven of the Protestants were imprisoned for two days. All of the adults were made to pay a fine of approximately £100 each and a follow-up village meeting was scheduled for 4 January 2016, when the destruction of property and forced displacement took place.

According to Herrera, municipal, state and federal officials had all received repeated requests for urgent precautionary measures since November 2015, but they did not respond and no action was taken. The displaced families are currently being housed in the Municipal Hall in Las Margaritas.

CSW’s Chief Executive Mervyn Thomas said, “We were deeply disturbed to hear of the forced displacement of these 34 men, women and children on account of their religious beliefs and even more disturbed that despite warnings for months, and a series of documented illegal actions on the part of the village authorities, the Mexican government, at every level, failed to intervene to uphold the law.

“The government should be ashamed that because of their inaction the situation escalated to violence and these families are now homeless. We call on the international community to raise this case and others like it with the Mexican government as a matter of urgency. We also call on Governor Velasco Coello and President Peña Nieto to take swift action to resolve this situation, to protect the basic rights of these families and to hold those who have committed criminal acts in the name of religious intolerance to account in the courts.”