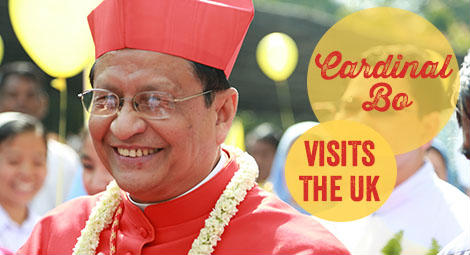 Are you curious about who Cardinal Bo is and why he’s visiting the UK? Those of you who follow our work in Burma might have heard a little of why CSW (along with several other organisations) is so excited to host him!

His Eminence Cardinal Charles Maung Bo, Archbishop of Yangon (Rangoon) since 2003, became Burma’s first ever cardinal in 2015. For a long time he’s been one of the most outspoken voices for human rights, religious freedom, inter-religious harmony, peace and justice in the country, as well as a friend of CSW.

When he was appointed as cardinal, he told the media, “I want to be a voice for the voiceless”- words that should be familiar to any CSW supporter!

Read more from Cardinal Bo in his own words: Download a PDF of extracts from his talks & sermons.