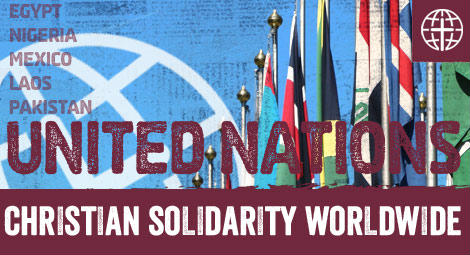 CSW applied in 2009 for consultative status with the UN’s Economic and Social Council (ECOSOC), an official UN accreditation which would give CSW access to the key human rights advocacy platforms including the Human Rights Council and General Assembly.

In a highly questionable decision, the NGO committee voted 11– 4, with one abstention and three absent, to deny CSW’s application. The NGO Committee comprises 19 UN member states. It is tasked with considering applications for consultative status by NGOs and facilitating civil society access to the UN. States that voted against CSW’s application include China, Cuba and India. The UK Mission to the UN will be appealing the decision to the ECOSOC body that oversees the NGO Committee.

The vote on CSW’s application was called by the Permanent Mission of Greece to the UN, whose representative Mr Georgios Pouleas said: “Greece attaches major significance to promoting religious tolerance and countering any discrimination based on religion or belief. Christian Solidarity Worldwide has over three decades of experience in advocating freedom of religion or belief and engages regularly with the United Nations mechanisms providing valid evidence-based analysis. Greece strongly supports CSW and we believe that their contribution to ECOSOC would be valuable and meaningful.”

NGO Committee members deferred CSW’s application since 2009 by asking more than 80 questions about CSW’s work. Despite providing timely and comprehensive answers to all questions and attending NGO Committee sessions several times, CSW’s application continued to be deferred, hampering CSW’s opportunities to promote the right to Freedom of Religion or Belief (FoRB) at the UN.

During the NGO Committee session on 3 February, CSW’s application was supported by His Excellency Ambassador Martin Shearman from the UK Mission to the UN in New York, who said: “The work of CSW is rooted in the UN Charter and the Universal Declaration of Human Rights. They support the right of all to freedom of religion or belief. For this Committee not to recognize an NGO that is committed to defending the rights of all, regardless of their religion or belief and, in particular, to making full and active use of UN mechanisms, including the UPR, is counter-productive and indefensible.”

After the vote, Georgios Pouleas of the Permanent Mission of Greece to the UN said: “Unfortunately, the NGO Committee decided through a vote not to grant consultative status to the NGO Christian Solidarity Worldwide. My delegation, having voted yes, is deeply disappointed with the result, since we are convinced that CSW’s contribution to ECOSOC would be crucial in the field of freedom of religion or belief.”

Many other organisations, especially those working on human rights, have also had their applications for ECOSOC consultative status continuously deferred by the UN NGO Committee. The UN Special Rapporteur on the Rights to Freedom of Peaceful Assembly and of Association, Maina Kiai has said that the practices of the NGO Committee “profoundly undermine the ability of the UN to constructively engage with civil society. States sitting on the Committee should champion the right to freedom of association and the right to freedom of peaceful assembly.”

CSW’s Chief Executive Mervyn Thomas said: “We are extremely disappointed by the NGO Committee’s decision to deny CSW full access to the UN, despite years of answering their questions as our application has been repeatedly deferred. It is deeply concerning that the UN Committee on NGOs, the very entity which is tasked to facilitate NGOs access to the UN, is instead actively blocking civil society access to the UN. We believe that this decision is effectively an attempt to silence CSW and undermine the promotion of freedom of religion or belief within the UN system. We are deeply grateful for the Permanent Missions of the Greece, Israel, Uruguay and the US, who voted to support our application. We also warmly welcome the support of the UK Mission to the UN and their intention to appeal this decision on our case to the ECOSOC body which oversees the work of the NGO Committee.”