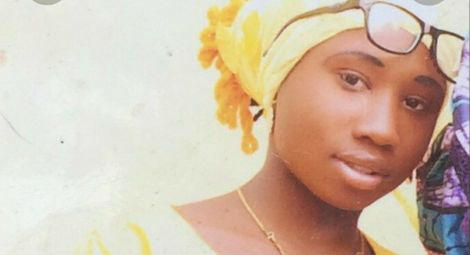 Call to Prayer for Leah Sharibu

Churches worldwide held prayers on 25 March in response to a call to prayer issued by the Christian Association of Nigeria (CAN) for the release of Leah Sharibu, the Christian girl from Dapchi, Nigeria, who is still being held by the Boko Haram terrorist group for refusing to renounce her faith in exchange for freedom.

On 21 March, the al-Barnawi faction of Boko Haram returned 104 of the 110 girls they had abducted on 19 February from the Government Girls Science and Technical College in Dapchi, Yobe State. They did so following an agreement that saw armed forces withdraw from the town, allowing the terrorists unhindered access.

As well as confirming that five of their fellow abductees were dead and had been buried in the bush, returnees said Leah Sharibu had been “held back on religious grounds” due to her refusal to renounce her faith and wear a hijab. Her mother, Rebecca Sharibu, was informed that Leah had already boarded the vehicle bound for Dapchi along with others, but was told to disembark after refusing to recite the Islamic profession of faith: “They said my daughter would only be brought back home the day she knows how to recite Kalima shahada.”

In an interview with Nigerian media, one of the girls speculated that she and the others may have been released “because we are Muslims and they felt it was right for them to free us so that we will not suffer”.

As reports circulated on 24 March of soldiers withdrawing from Dapchi town and Boko Haram militants on the move, many anticipated that Leah was about to be set free. Speculation was heightened further when the Inspector General of Police (IGP), Ibrahim Idris, appeared to confirm that her release was imminent in an interview given to journalists during his visit to the Military Command and Control Centre in Maiduguri, Borno state. However, when the release did not occur and Leah’s father, Nathan Sharibu, confirmed his daughter was “yet to return”, the police media office issued a statement on 25 March claiming the IGP had been “misunderstood and misquoted.”

Calls continue to be issued for the Buhari administration to secure Leah’s immediate release. Rev Dr Jeremiah M Gado, president of the Evangelical Church Winning All (ECWA), to which Leah and her parents belong, issued a statement saluting her “courage, doggedness, and faith” and condemning “in strong terms any attempt to forcefully convert anyone from one religion to another.”

On 26 March, the Congress of Northern Nigeria Christians (CNNC) 19 states and Abuja said that while its members rejoiced that nearly all the Dapchi girls had been released, they were “heavily saddened” that Leah “is been held because of her faith.” In a statement issued on 23 March, CAN called for “total re-organisation of the security agencies aligned with professionalism that will make them respond rapidly to security challenges in any part of the country”, and the creation of “a high power judicial panel to investigate the abduction of the schoolgirls with a view to unmasking those behind the abduction and make them face the full wrath of the law.”

On 22 March, the European Union (EU) Spokesperson for Foreign Affairs and Security Policy, Catherine Ray, commended the Nigerian government for the release of the 104 Dapchi girls, and said: “We renew our solidarity with all the girls still held captive and call for their liberation. … All young people have a right to safe education, and the EU will work with Nigeria in supporting efforts to secure this objective.”

Mervyn Thomas, Chief Executive of Christian Solidarity Worldwide (CSW), said: “Our prayers are with Leah and her family as they await her return. Given Nigeria’s ethnic and religious diversity, we remain perplexed at her apparent exclusion, on account of her religious beliefs, from the deal that secured the release of the other girls. It is vital that last weekend’s rumours of her imminent release do not divert international attention from her case and hamper efforts to ensure her release. There must be no let-up in pressure being brought to bear on the militants holding her. CSW also continues to call on the Nigerian government to ensure that every child is free to pursue an education without fear."