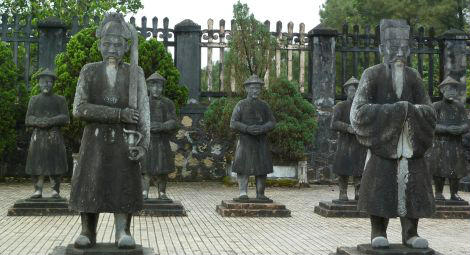 Six Vietnamese defendants, including Christian human rights lawyer and pro-democracy activist Nguyen Van Dai, pastor and activist Nguyen Trung Ton and legal expert Nguyen Bac Truyen, will stand trial on 5 April. They are accused of ‘carrying out activities aimed at overthrowing the government’ under Article 79 of the Vietnamese penal code, which carries a maximum penalty of capital punishment.

Lawyer and activist Nguyen Van Dai has provided legal advice and representation to victims of human rights abuses – including religious minorities – across Vietnam. As a result of his work, Dai has been repeatedly harassed and attacked by individuals working for the authorities and served four years in prison.

On 16 December 2015, Dai and his colleague, Le Thu Ha, were taken into police custody in Hanoi. At the time of his arrest, Dai was preparing to meet European Union representatives who were in Hanoi for the annual EU-Vietnam human rights dialogue. Nguyen Van Dai and Le Thu Ha were charged with ‘conducting propaganda against the Socialist Republic of Vietnam’ under Article 88 of the penal code; the charge was later changed to ‘carrying out activities aimed at overthrowing the government’.

Nguyen Trung Ton is a human rights defender and Protestant pastor who has advocated for the right to freedom of religion or belief and spoken out against social injustices. He and his family experienced first-hand the authorities’ persecution of religious minorities when they and their church members were repeatedly and violently attacked by local authorities and policemen. Pastor Ton was sentenced to two years’ imprisonment and two years’ house arrest. After his release in 2013 Pastor Ton joined the Interfaith Council of Vietnam, which advocates for religious freedom. He was arrested again on 30 July 2017.

Hoa Hao Buddhist Nguyen Bac Truyen is a legal expert who has provided pro bono legal assistance to families of political prisoners, victims of land grabs, and persecuted religious communities. In 2006, as a result of his pro-democracy writing and activism, Truyen was arrested on a charge of ‘propaganda against the state’ under Article 88 of the penal code, and sentenced to three and half years’ imprisonment and two years’ house arrest. Following his release in 2010, Truyen provided pro bono legal assistance through the Vietnamese Political and Religious Prisoners Friendship Association. He was arrested on 30 July 2017.

Christian Solidarity Worldwide’s (CSW’s) Chief Executive Mervyn Thomas said, “Activists in Vietnam play a vital role in defending the rights of citizens, including the right to freedom of religion or belief. CSW’s research shows that Christians and other religious communities in Vietnam continue to experience violations to this right, while Protestant Christians from indigenous people groups suffer a double discrimination as both religious and ethnic minorities.

Nguyen Van Dai, Nguyen Trung Ton and Nguyen Bac Truyen are three of the most courageous defenders of religious freedom in Vietnam today: they have risked their personal safety and their freedom to stand up for the rights of the most vulnerable in society, and have been beaten, harassed and imprisoned for doing so. We call on the Vietnamese government to release immediately and unconditionally the six defendants and all those detained in connection with their peaceful defence of human rights, in line with the provisions of the International Covenant on Civil and Political Rights, to which Vietnam is a party.”