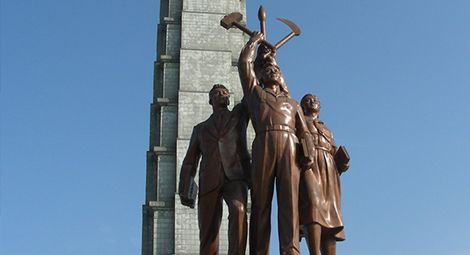 South Korea urged to include human rights in talks

As your government discusses a proposed summit with North Korean leader Kim Jong Un, we welcome the renewed inter-Korean dialogue and the recent progress in inter-Korean relations and urge your government to press for human rights issues to be included in all discussions with the Democratic People’s Republic of Korea (DPRK), including in the summit agenda.

The United Nations Security Council has recognized in several recent debates and resolutions that human rights abuses in the DPRK and regional peace and security are intrinsically connected. Any long-term resolution of security issues on the Korean peninsula will require addressing the DPRK’s repressive rights record and pressing the North Korean government to commit to fundamental and wide-ranging reforms. On March 12, 2018, at the UN Human Rights Council, Tomás Ojea-Quintana, the UN special rapporteur on the situation of human rights in North Korea, urged countries to make it a priority to keep pressure on the DPRK to improve its human rights record and not allow it to be sidelined or upstaged by concerns about the DPRK’s weapons proliferation, noting that “any advancement on the security dialogue should be accompanied by a parallel expansion on human rights dialogue.”

We agree and urge you to include the following issues in the agenda of all meetings with the DPRK, including your summit with Kim Jong Un:

During 2017, there was some limited re-engagement by the DPRK with international human rights mechanisms. We recommend that you urge the DPRK to enlarge the scope of its cooperation, including in the framework of the Universal Periodic Review (UPR), such as:

·       Undertaking immediate steps to address allegations about poor conditions and abuses in detention centers and prisons, including by opening all government detention centers, reeducation and forced labor camps, jails, and prisons to visits by international observers, and taking steps to release any detainees held for activities that should not, under international law, be criminalized, such as exercising freedom of speech and religion, attempting to leave or leaving the country without permission.

·       Continuing to engage with UN human rights mechanisms, including the upcoming UPR and under the Convention for the Rights of Persons with Disabilities; accepting UN recommendations and implementing changes on the ground; and signing and ratifying key human rights treaties, including International Labor Organization conventions and the Convention against Torture.

·       Establish a regular inter-Korean human rights dialogue and ensure that it is principled, follows clear benchmarks, and is accountable. Such meetings should be followed by public briefings about their content and agreements on next steps, which should include follow up meetings at the highest levels of each government.

·       Agree on mutual free and uncensored television and radio broadcasts across the peninsula. One proposed first step could be negotiating for mutual broadcast of ROK national television channel KBS and the DPRK’s KCTV.

Since the Korean War (1950-1953), an estimated one million Koreans have been separated or forcibly removed from their families through displacement during the war, enforced disappearances and abductions, or following escape from the DPRK. According to the Ministry of Unification, about 130,000 ROK citizens have applied to take part in reunion meetings organized by the two Korean governments since 1988. Only about 18,800 people have met their families in reunions, while approximately 60,000 are still waiting to meet their family members. More than 60 percent are now in their 80s or older.

We recommend that you:

·       Continue to urge the DPRK to agree to regular reunion meetings of separated families, expanding its scope to any South Korean national with relatives in the DPRK, and allow regular exchanges of letters or phone calls and visits between them, at least on humanitarian grounds. Such meetings should not be held hostage to developments on security matters or inter-Korea relations.

·       Press North Korea to respect the right of every person to leave any country, including his/her own, and to return to her/his country, including by granting exit visas to all persons who hold or have held South Korean or other foreign nationality and their family members who wish to leave North Korea for South Korea or other countries. The International Committee of the Red Cross should be asked to independently assess each individual's wishes in private interviews.

·       Urge the DPRK to engage in broader exchange on the issue of abductions and to commit seriously to investigate and respond to the allegations made against it.

According to UNICEF, in December 2017 an estimated 18 million people in the DPRK were experiencing food insecurity, while 200,000 children were acutely malnourished. One in three children under five years of age, and almost half of the children between 12 and 23 months, were anemic. In October 2017, the UN World Food Program said it needed US$25.5 million for the following six months to aid North Korean women and children. UNICEF faces a shortfall of US$9.6 million to cover its programs in the DPRK in 2018. In September 2017, South Korea pledged to donate US$8 million to these two organizations, at a time to be established.

Humanitarian aid is an international responsibility and is crucial to protect human life and rights. At the same time, it is crucial to monitor the distribution of aid to ensure it is delivered to its intended recipients, the most vulnerable, and not diverted to the DPRK military or others, regardless of whether it is provided directly by the ROK or through South Korean private institutions. Humanitarian aid for vulnerable populations is critical for young children, the elderly, persons with disabilities, persons in detention, and pregnant and nursing women. We recommend that you:

·       Provide necessary humanitarian aid and urge the DPRK government to accept international or domestic humanitarian aid, with proper monitoring consistent with international standards of transparency and accountability. These standards include access throughout the country to determine needs and the ability to visit places where food and other aid is delivered.

We are fully aware that raising human rights issues with the DPRK is a daunting task and note North Korea’s comment on March 31, 2018, saying South Korea’s support of a resolution on the situation of human rights in North Korea at the UN Human Rights Council, is “an open political provocation to the DPRK and an intolerable act of chilling the atmosphere for dialogue.” However, we believe South Korea should maintain its “firm stance” as Foreign Minister Kang Kyung-wha said but should further press to bring up the subject. Your government’s leadership is crucial in efforts to help improve human rights conditions in the DPRK while at the same time finding real, long-term solutions to the security crisis.

Thank you for your consideration and we would be pleased to discuss these matters further with your staff.

National Association for the Rescue of Japanese Kidnapped by North Korea, Japan

The Association for the Rescue of North Korea Abductees (ARNKA), Thailand