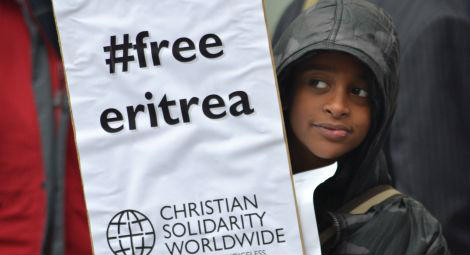 CSW has been monitoring and researching developments in Eritrea since 2002, including conducted yearly interviews with refugees and their community leaders in four nations. Consequently this submission draws from research and from the detailed witness testimonies that were collated between 2003 and 2016.

CSW wishes to bring the following concerns and recommendations to the Committee’s attention, in reference to the International Covenant on Civil and Political Rights (ICCPR).

When Eritrea won independence from Ethiopia in 1991 following a lengthy war, there were high hopes it would become a beacon of democracy and good governance for the African continent. However, a costly post-independence war with Ethiopia depleted the country’s resources; and the continuing tension caused by Ethiopia’s resistance to the demarcation of an internationally-agreed common border has provided a pretext for the excessive militarisation of society and the effective institution of a perpetual war footing. Promised democratisation and elections have been deferred indefinitely in favour of rule by presidential decree.

Article 4 of the ICCPR states while that in a time of public emergency threatening the life of the nation, a country may take measures derogating from their obligations under the covenant, the country must ensure that these measures remain consistent with their other obligations under international law and do not involve discrimination solely on the ground of race, colour, sex, language, religion or social origin, nor may there be any derogation from articles 6, 7, 8 (paragraphs I and 2), 11, 15, 16 and 18 under this provision.

However, irrational fear on the part of the Eritrean government of any perceived threat to national unity has meant that the extensive rights enshrined within the unimplemented national constitution, which was drafted and ratified by the National Assembly in 1997, remain disregarded by the very government that oversaw its creation. Furthermore, the succeeding years have been characterised by comprehensive, large- scale and egregious violations of the rights of Eritrean citizens by the regime and its agents, in contravention to its international obligations.