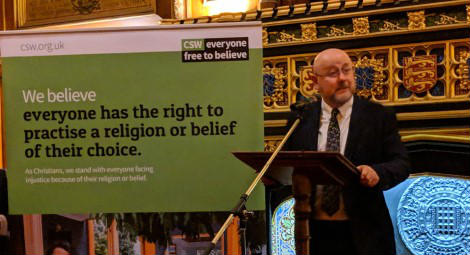 CSW’s founder and Chief Executive, Mervyn Thomas, launched his autobiography, ‘Standing Up, Speaking Out,’ at an event at the Speaker’s House in Parliament on 8 January.

The book is the story of Mervyn’s life and his experiences of campaigning on behalf of people around the world that have faced persecution and discrimination because of their beliefs. Mervyn founded CSW 40 years ago, and the organisation has since grown into an international advocacy organisation working to promote, protect and uphold freedom of religion or belief (FoRB) in over 20 countries.

John Bercow, the Speaker of the House of Commons, who hosted the event, said: “From the field of human rights and the battle against persecution, and the remorseless drive to help provide succour and offer a voice to the voiceless and the most destitute, Mervyn is a real champion. He has devoted himself in his leadership of CSW to the translation of care from a word to a deed.”

Also speaking at the event, Alistair Burt MP said he was “full of admiration for the work which is encompassed in the book, but not only that, the life that has made the book in the first place.”

In his speech, Mervyn discussed why CSW advocates for FoRB for people of all faiths and none, saying: “We came to the conclusion without any shadow of a doubt that we should be speaking up for people who don’t share our Christian faith. If two people walked through this door and one was a Muslim and one was a Christian and they were hungry, we wouldn’t ask which one was the Christian we would feed them both. We need to speak up for those who are unable to speak for themselves, no matter what their faith is.”

Mervyn concluded: “I believe there is more awareness today of religious freedom at a political level than there has ever been… What we now need to do is turn that awareness into concrete action that really makes a difference to people’s lives.”