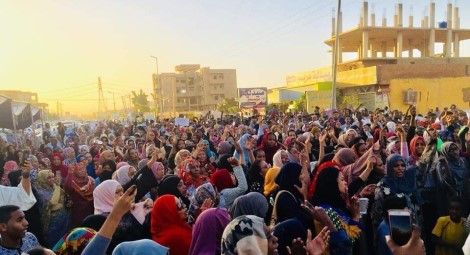 The Democratic Lawyers Alliance reported that 870 people were transferred to the emergency courts in Khartoum and Omdurman on 28 February, charged with participating in protests.

At least 59 people were sentenced to between two weeks and five years in prison for protesting against the government and allegedly breaching emergency orders which were introduced following a Presidential declaration of a nationwide one-year state of emergency on 22 February. The remaining protesters were issued with fines, released on bail awaiting trial or had their cases dismissed.

As well as declaring the state of emergency, President Omar al-Bashir also announced four emergency decrees prohibiting unauthorised protests and the publication of information that ‘undermines the constitutional order’, and granting sweeping powers to the country’s security apparatus to enter and search any building, restrict movement of persons, and seize assets or property.

CSW’s Chief Executive Mervyn Thomas said: “Sudan’s state of emergency grants wide ranging powers and immunity to security personnel at a time when its human rights record has already been deteriorating despite the lifting of sanctions and greater engagement with the international community.  The severe sentences handed to peaceful protesters are in breach of fundamental rights guaranteed in Sudan’s constitution. We urge the Sudanese authorities to implement the reforms that the Sudanese people are demanding, in addition to the substantial human rights reforms which have been recommended by the UN for several years.”

Sudan’s emergency measures were implemented to contain nationwide protests that began in December 2018 and are still ongoing, with an estimated 50 people killed since the start of the year. The demonstrations initially centred on the rising cost of essential amenities, but have transformed into demands for President Bashir’s resignation.

In response President Bashir has dismissed the national government, replaced state governors with military officials, and appointed Ahmed Haroun as acting chair of the National Congress Party (NCP), Sudan’s ruling party. Mr. Haroun is wanted by the International Criminal Court (ICC) for 20 counts of Crimes against humanity and 22 counts of war crimes for his part in the Darfur conflict.

The Democratic Lawyers Alliance has called the emergency declaration unconstitutional, claiming that the situation in Sudan does not qualify for such extreme measures, as the country is not experiencing an exceptional situation, such as war, an invasion, or a natural disaster.

Mr Thomas continued “We urge the TROIKA, made up of Norway, the United Kingdom and United States, as well as Canada and the European Union to take the lead in supporting the establishment of an independent, international investigation into the deaths of peaceful protesters in Sudan. We also urge the EU to suspend its ‘phased-engagement’ with Sudan and the UK to postpone their biannual ‘Strategic Dialogue’ until the state of emergency has been lifted.”