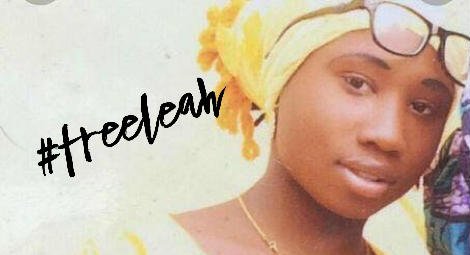 David Linden MP has written to the Prime Minister asking her to pressure the Nigerian Government to prioritise the release of Leah Sharibu and other female captives held by terrorists.

In a letter marking International Women's Day on 8 March, David Linden MP has written to Prime Minister Theresa May, asking her “to make every effort to pressure the Nigerian Government” to prioritise the release of Leah Sharibu and other female captives held by terrorists in the north east of the country.

Leah Sharibu was one of 110 girls kidnapped from their school in Dapchi, Yobe state, by the Islamic State West Africa Province (ISWAP), a faction of the Boko Haram terrorist group, on 19 February 2018. While the Nigerian government negotiated the release of her surviving classmates, Leah, the only Christian, was denied freedom for refusing to convert.

Last month CSW organised a protest outside the Nigerian High Commission in London to mark one year since Ms Sharibu’s abduction, and called for renewed efforts on the part of the Nigerian Government to secure her freedom.

In his letter, Mr Linden writes: “The Nigerian Government has a clear constitutional obligation to ensure that every citizen is ‘protected irrespective of his/her gender, culture and religious belief.’ However in this instance, a minor was not only left in the hands of terrorists on account of her religious beliefs when her surviving colleagues were released; she also continues to suffer multiple and severe violations… It is a terrible indictment of the Nigerian Government’s failure to assist a vulnerable citizen, and of an international community that has not held it sufficiently to account for this.”

He continued: "I would urge Her Majesty's Government to make every effort to pressure the Nigerian Government to prioritise the release of Leah Sharibu, Alice Ngaddah, and the remaining 112 girls abducted in 2014 from their school in Chibok, Borno State. It would also be valuable in any discussions the Foreign Office has with the Nigerian Government to impress upon them that the Nigerian Armed Forces should be sufficiently equipped to address [the terrorist] insurgency, and that it is of utmost importance that schools in conflict-ridden areas receive adequate protection."

Mr Linden also raised concerns regarding Nigeria’s presidential and parliamentary elections, which took place on 23 February, and which was marred by violence, voter suppression and irregularities. 39 people are reported to have died in election-related violence.  The opposition presidential candidate Atiku Abubakar has launched a legal challenge to the declared outcome.

CSW's Chief Executive Mervyn Thomas said: "We welcome David Linden MP’s efforts to raise the profile of Leah Sharibu’s case and echo his call for the UK government to encourage Nigeria to prioritise her release, and to free the other female hostages held on account of their religious beliefs. Ms Sharibu, a minor, has been in the hands of this notoriously violent sect for more than a year, and during this time she has faced the threat of execution, and been declared a slave for life. It is essential that Nigeria acts swiftly to free her, and that the UK and the rest of the international community offer every possible assistance in this regard. In addition, we share Mr Linden’s concerns regarding the conduct of the recent elections, and call on Nigeria to ensure free, fair and peaceful gubernatorial elections on 9 March."