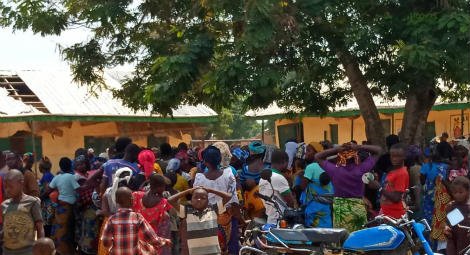 At least 120 people have died since 9 February in a series of attacks by Fulani militia on communities in the Adara chiefdom of southern Kaduna. The violence comes in the wake of a statement by the Kaduna state governor on the eve of Nigeria’s presidential elections in February regarding an alleged massacre of Fulani villagers in the area.

On 11 March, 52 people were killed and around 100 homes were destroyed in attacks on Inkirimi and Dogonnoma villages in Maro, Kajuru Local Government Area (LGA).  The victims included women and children. According to survivors, their assailants divided into three groups; one group was shooting, another set fire to homes as people ran away, and the third waited in the bush to intercept fleeing villagers. Later that evening, dozens of people were injured and 43 houses were burnt in an attack on Ungwan Gora village.

Pictures have emerged of hospitalised survivors of the Dogonnoma attack, showing men women and young children with deep machete wounds to different parts of their bodies.  CSW was informed that one traumatised female survivor who suffered a deep cut to the hand had delivered a stillborn baby soon after the attack.

The violence is reported to have displaced thousands of households as people have deserted their villages in search of safety. Following the 10 March attack, the Governor of Kaduna state, Nasir el Rufai, issued a statement of condolence and claimed to have deployed the air force and more ground troops to the area.  Nevertheless, Inkirimi and Dogonnoma villages were targeted the following day. A dawn to dusk curfew has now been imposed on the area.

The attacks on Kajuru occur in the wake of a televised statement by Governor el Rufai on the eve of February’s presidential and national assembly elections, in which he asserted that 66 people had been killed in Kajuru LGA and insinuated that the victims were mostly women and children from the Fulani ethnic group. This was widely refuted, including by the Nigeria Emergency Management Agency (NEMA). However, as pressure mounted on the Governor to either prove or withdraw his claim, he reiterated his assertion, raising the alleged death toll to 133 and ordering the arrests of nine Adara elders and village chiefs in connection with the alleged massacre.

The Adara people are still mourning their traditional ruler, the Agom Adara III, HRH Dr Maiwada Raphael Galadima, who was abducted and murdered by Fulani assailants in October 2018, despite payment of a ransom. In December 2018, and without consultation, the Kaduna state government abolished and divided the predominantly Christian chiefdom, placing it under two emirates, despite the fact that under 15% of the population in the area are Hausa Fulani.

In a statement issued on 12 March the Adara Development Association described  Kajuru LGA, as “gripped by a fully-fledged and supported group of terrorists that have been wreaking havoc in our land for long, while those saddled with the responsibility of securing us deliberately looked the other way. …The terrorists come in their hundreds, take time to kill, then leave without anyone being caught or apprehended by the security.” The statement ends with a call for the unconditional release of the detained Adara elders: “their continued incarceration is a travesty of justice that has no place in [Nigeria’s] democratic setting.”

On 13 February, the Southern Kaduna People’s Union (SOKAPU) launched an appeal on behalf of survivors of the recent attacks, for assistance with hospital bills, resettlement and reconstruction.

CSW’s Chief Executive Mervyn Thomas said: “We are deeply disturbed by the resurgence of militia attacks in southern Kaduna, and extend our deepest condolences to the Adara people. We echo the appeal for the immediate and unconditional release of the Adara elders, who have been detained arbitrarily. In the interests of justice and equity, we call for the restoration of the Adara Chiefdom, and urge all who are in positions of authority to refrain from making unsubstantiated accusations capable of inciting violence and damaging fragile community relations even further. We also urge the state and the federal governments to address this violence in a swift, decisive and unbiased manner, and to prioritise rehabilitation and justice for traumatised survivors. The relentless death and destruction is a sad indictment of the continuing failure by both levels of government to fulfil the primary mandate of protecting all its citizens impartially."