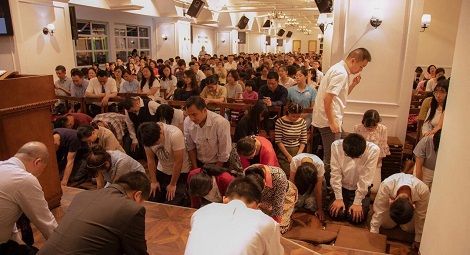 Members of Early Rain Church in China continue to be detained, disappeared and harassed following a crackdown on the church in December 2018.

A social media post by the church dated 20 March reports that 11 members are still in criminal detention, including Pastor Wang Yi and his wife Jiang Rong, who are both accused of inciting subversion. Over 100 church members were arrested in December.

In addition, at least two church members have gone missing this month. Pan Fei went missing on 4 March: his whereabouts are unknown. Gou Zhongcan also went missing on 15 March: his mobile phone and computer have been removed from his home. Members’ landlords are increasingly pressuring them to move out of their homes.

The crackdown on Early Rain comes at a time of increasing pressure on unregistered ‘house churches’ in China, while at the same time state-sanctioned churches are being forced to fly the national flag, remove religious symbols and sing pro-Communist songs in services. In some areas under-18s have been prohibited from joining religious meetings. Catholic and Protestant churches, mosques and other religious sites have been demolished in various provinces.

Earlier this month China’s record on human rights, including religious freedom, was under the spotlight at the UN Human Rights Council as part of the Universal Periodic Review, a process by which UN member states have their human rights record reviewed every four and a half years. As part of the UPR process, CSW submitted information drawing attention to grave violations of the right to freedom of religion or belief (FoRB) in the country

In February CSW also joined over 15 organisations in calling on the Human Rights Council to adopt a resolution establishing an international fact-finding mission to investigate the arbitrary detention of over one million predominantly Muslim Uyghurs, Kazakhs and members of other ethnic groups in Xinjiang Uyghur Autonomous Region. Several UN member states and non-governmental organisations, including CSW, participated in side events at the Council session drawing attention to the situation in Xinjiang.

During the adoption of China’s UPR outcomes, the Permanent Mission of Norway to the United Nations said: “We regret that China did not accept our recommendation to provide transparency on the situation for religious minorities in Xinjiang, including allowing UN-mandated observers unrestricted access to places of internment. Indeed, we note with concern that no UPR recommendations related to the human rights situation in Xinjiang were accepted.”

Other states that have voiced concern over the situation in Xinjiang include Canada, the Czech Republic, Germany, the Netherlands, Turkey and the UK.

CSW’s Chief Executive Mervyn Thomas said: “The continued detention of Pastor Wang Yi, Jiang Rong and other members of Early Rain Church constitutes a grave violation of the right to freedom of religion or belief. The charge of inciting subversion is completely unfounded: this is a response to Pastor Wang’s peaceful criticism of the authorities’ treatment of independent churches. We call on the government of China to immediately release all members of Early Rain Church still in detention and all those arbitrarily detained across China, including the one million individuals currently held in Xinjiang. We further call on the government to end the harassment of all religious groups in China, ensuring that all Chinese citizens are free to practice their religion or belief. The international community must take every opportunity to raise this with China at the Human Rights Council and elsewhere.”