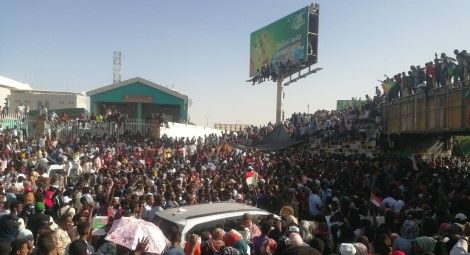 Sudanese, African and International civil society calls for protection of the democratic will of the people of Sudan.

Re: Sudanese, African and International civil society calls for protection of the democratic will of the people of Sudan

We, the undersigned Sudanese, African and International civil society organizations write to express our solidarity with the people of Sudan who, over the past several months, have been calling for a peaceful, democratic, transition. This effort has been endangered by the 11 April military coup. Although recent statements from the military transitional council are encouraging, the Security Council must not forget that a military regime is still in power and must take action to ensure a speedy transition to civilian authority and democratic reform. As the Troika of the United States, United Kingdom and Norway said on 14 April, “To date, the legitimate change that the Sudanese people are demanding has not been achieved. It is vital that that the authorities listen to the calls from the Sudanese people.”

The Sudanese people’s quest for peace and democratic change has propelled country wide protests since December 2018, which developed on 6 April 2019 into massive protests including a sit-in at the military headquarters in Khartoum which continues to the present moment. The protest movement has engaged across Sudan and been led by a wide variety of professionals and political forces. Women have also played a critical role in the protest movement, according to commentators sometimes constituting as many as two-thirds of protestors and becoming emblems of the movement.

Although the people of Sudan have been calling for an end to the regime of President Omar Al Bashir, they did not want him to be replaced with a military regime. Over his 30 year tenure, President Bashir has overseen the waging of several wars that have primarily targeted civilians and were designated by the Security Council as threats to international peace and security, severe repression of political opposition and civil society, shrinking of civil society space and the secession of South Sudan. Military authority threatens more of the same.

As the African Union Commission Chair Mousaa Faki declared, a “military take-over is not the appropriate response to the challenges facing Sudan and the aspirations of its people”. The military council’s imposition of a two year transitional period headed by the military, dissolution of the national assembly, suspension of the 2005 Constitution and imposition of a state of emergency and lack of a plan for transition to civilian rule, however, indicate that they do not share the protesters’ goal of a peaceful and democratic Sudan. Although the replacement of Ibn Auf and more conciliatory statements about a transition to civilian authority are encouraging, the rhetoric has not yet been backed up with action. As a result, protestors, including both civic and political forces, have remained in the streets calling for a civilian transitional government and structural reform of the state.

Through their continued presence in the streets and multiple statements, the Sudanese people have shown their commitment to real change. The Sudanese people not only want this change, they are ready for it.  This phase of the popular protest was led by the Declaration of Freedom and Change (DFC) forces, a unique combination of all political and civil society actors representing a wide range of Sudan’s ethnicities, regions and ideological and political affiliations. It includes a wide range of political parties, civil society groups, the Sudanese professional associations, armed movements and others. Through this coalition, a detailed platform for transition in line with internationally agreed principles of human rights and democratic freedoms has already been developed.

The situation at the moment is highly fluid and the stakes are high. Although recent statements have been positive, they follow closely on the heels of serious threats. Military statements a few days ago contained clear threats against those who continue to protest in defiance of the curfew. The imposition of a three-month emergency declaration and closure of borders send worrying signals that at least some in positions of power would prefer a violent crackdown to real engagement with protesters’ concerns. Reported attempts to break up the sit in at army headquarters are further cause for concern.

We appreciate the Secretary General’s statement today that he “stands ready to support the Sudanese people as they chart a way forward” and that “the democratic aspiration of the Sudanese people will be realized through an appropriate and inclusive transition process”. We now call on the UN Security Council and its members to support this approach and take action to encourage a peaceful transition to democratic, civilian rule able to oversee comprehensive democratic transformation. This is critical to prevent violence which, given Sudan’s turbulent history of humanitarian and human rights crises and large-scale displacement and its role in regional diplomacy could quickly escalate to a threat to international peace and security. At the same time, this is also an opportunity for the Council to support the people of Sudan to resolve ongoing conflicts both in the country and across borders to promote greater security and stability in the region.

We call upon the UN Security Council to support long term peace and security in Sudan:

• Ensuring that the Council’s focus on Sudan is expanded to include the impacts of the coup;

• Expressing support for the Sudanese people’s demand for an urgent transition to a civilian government in line with the core principles of the UN Charter and the Universal Declaration on Human Rights, and requesting the Secretary-General to use his good offices to facilitate such an agreement with a short, clear timeline;

• Remain committed to supporting a comprehensive democratic transition in the country; and

• Ensuring that women are recognized as equal partners in political negotiations and that gender considerations are comprehensively integrated into the transition process in line with the commitments of UN Security Council Resolution 1325.

• Regional Center for Training and Development of Civil Society (RCDCS)

• The Sudan Consortium, a coalition of 51 African and International civil society organizations

calling for a just and sustainable peace in Sudan.