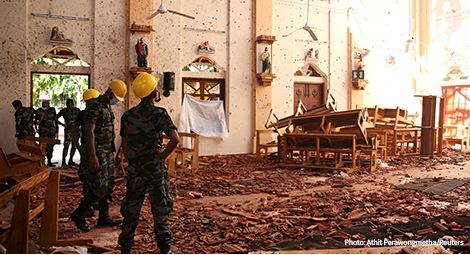 CSW condemns the coordinated attacks on churches and hotels in Sri Lanka on Easter Sunday, which have claimed at least 190 lives and injured at least 450 people, according to news reports.

Churches and five star hotels in the majority Catholic cities and towns of Colombo, Negombo and Batticaloa have been bombed, with more blasts being reported. According to The Guardian, Sri Lanka’s Defence Minister Ruwan Wijewardene has said that the culprits are likely to have been religious extremists. At the time of writing, the police are reportedly in the process of making arrests and a curfew has been imposed.

CSW’s Chief Executive Mervyn Thomas said, “CSW extends our heartfelt condolences to all those who lost loved ones in the Sri Lanka hotel and church attacks this Easter Sunday, one of the most sacred times in the Christian calendar. We condemn these brutal attacks and urge the authorities in Sri Lanka to investigate and prosecute those responsible for these attacks without delay. We stand in solidarity with the families of victims and survivors of these attacks.”