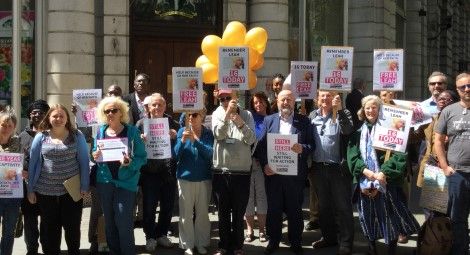 CSW marked Leah Sharibu’s 16th birthday on Tuesday 14 May by holding a prayer vigil outside the Nigerian High Commission in London.

Ms Sharibu was one of 110 schoolgirls abducted from their school in Dapchi, Nigeria, by a faction of the terrorist group Boko Haram in February 2018. While all of her surviving classmates were released the next month following government negotiations, Ms Sharibu, the sole Christian among them, was denied her freedom as she refused to convert as a precondition for her release.

Speaking outside the Nigerian High Commission, CSW’s Chief Executive Mervyn Thomas, who shares a birthday with Ms Sharibu, said: “We are here today to show solidarity [with Ms Sharibu and her family].  We are here today to pray for her release, [and] to say to the Nigerian government: we want you to do something. We want you to move and make a difference in the life of Leah. Not only Leah but also [for] Alice Ngaddah, [and] the other Chibok girls. We will continue to protest and pray until we see her released and free again.”

The vigil was attended David Linden, Member of Parliament for Glasgow East, who also shares Ms Sharibu’s birthday. At the event, Mr Linden said: “Think of the birthday that Leah will have today, with her captors in Boko Haram, unable to see her family. It is important that we join here today in prayer for Leah’s safe release. We would also ask the Nigerian Government to do more, [there is] so much more they can be doing to negotiate for Leah’s release.”

During the protest, Mr Thomas, Mr Linden, and London-based Nigerian clergyman Pastor Fred Williams of Spirit Life Missions delivered a letter and a petition for Ms Sharibu’s release signed by 10,764 people to the High Commissioner’s representative.

Ms Sharibu's birthday was also marked by a series of events in several Nigerian cities.  In Abuja, events were held at the National Christian Centre and Unity Fountain Park. Ms Sharibu’s denomination, The Evangelical Church Winning All (ECWA), held a three hour service at its headquarters in Jos, Plateau state.  Acclaimed Nigerian Gospel artist Percy Panam Paul released a song in her honour, and early evening services are being held at Realm of Glory Headquarters Church in Lagos, Unity Chapel in Yola, and Cornerstone Christian Foundation in Port Harcourt.  In addition, a birthday cake cutting commemoration will take place at the United States (US) Senate building in Washington DC.