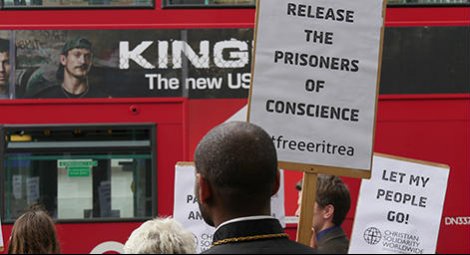 There are concerns that an annual protest vigil commemorating the closure of churches and highlighting an ongoing campaign of arrests targeting Christians, scheduled to take place outside the Eritrean Embassy in London today, 23 May, at 3:30pm, may be met by a counter protest for the first time.

In May 2002 the Eritrean government effectively outlawed religious practices not affiliated with the Catholic, Evangelical Lutheran and Orthodox Christian denominations or Sunni Islam, and launched a campaign of arrests that continues to this day, and which at its zenith saw an estimated 3000 Christians imprisoned.

The protest, which has taken place every May for 16 years, is jointly organised by CSW, the Eritrean Orthodox Church in the UK, Church in Chains, Human Rights Concern Eritrea and Release Eritrea, to mark the  anniversary of this ban and to show solidarity with Eritreans who have been imprisoned on account of their faith. This year there are concerns that the protest will be met with a counter-protest organised by a pro- government group that sought and was granted permission at the last minute to hold an all-day protest, ostensibly to mark Eritrea’s Independence Day.  In reality, Eritrean Independence Day is on 24 May, giving rise to concerns regarding the real motivations of its organisers and participants.

Despite recent seemingly positive developments, including the signing of a peace agreement with Ethiopia in September 2018, the human rights situation in Eritrea remains highly concerning.

Reports have emerged of the arrest of 141 Christians, including 14 minors, at their homes in Maitemenai, Asmara, on or around 10 May. The Christians were reportedly transported to separate detention centres according to their gender.

In another indicator that Eritrea’s human rights situation remains unchanged, Abune Antonios, the legitimate Patriarch of the Eritrean Orthodox Church (EOC), remains under house arrest. In a video smuggled out of Eritrea last month, the Patriarch detailed the circumstances surrounding his removal in violation of canon law, describing how his crosses and ceremonial regalia were forcefully taken from him and how he was  placed under house arrest without due process for 13 years. He also discussed his public appearance in July 2017, stating that he was asked by priests to pray in public, but again without due process. The Patriarch concludes by saying that all of these events have hollowed out the EOC and left it bereft of spiritual leadership.

On 29 April Eritrea’s four Catholic Bishops issued a pastoral letter calling for “resolute and historical change” through the setting up of a comprehensive truth and reconciliation plan. The bishops also called for “the establishment of a national commission entrusted with the campaign for truth and reconciliation whose main task should be the removal of the factors of tension and the promotion of dialogue and compromise among all the stakeholders.” The bishops described the plan as a means, amongst other things, of opening up a new era and laying “the foundations of a constitutional state system.”

CSW’s Chief Executive Mervyn Thomas said: “The recent arrests of Christians in Asmara is one of many signs that the Eritrean people continue to face the most severe violations of human rights on a daily basis. Today’s protest aims to draw attention to their ongoing plight, and to call on the international community to take decisive action. CSW will not be intimidated by the Eritrean government or any counter-protests and will continue to stand up and speak out until every prisoner of conscience is free and the rights of every Eritrean citizen are fully respected.”

·         Assemble from 3.15pm on Thursday 23 May for a short vigil that will culminate in handing a letter to the Eritrean Embassy. The protest should last for just over an hour.