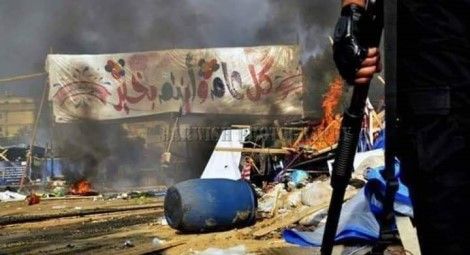 A sign at one of the protest sites displaying a festive greeting. Photograph: Harwish Photography

The organisations are calling for a special session of the UN Human Rights Council on Sudan, after a significant deterioration in the security situation, and the country’s suspension from the African Union.

On 6 June, the African Union Peace and Security Council (AUPSC) suspended Sudan from participating in any African Union (AU) activities until the military transfer power to a civilian-led transitional authority. The suspension from the regional body follows the deliberate killing, assaults and rapes of civilians in an attack on protest sites in the capital, Khartoum, on 3 June by security personnel who are reported to be members of the Rapid Support Force (RSF), a force accused of committing similar violations in Darfur. The current death toll is over 100, and at least 650 people have been injured in the coordinated attacks. Reports have emerged of bodies being thrown into the Nile by the RSF; sexual violence on the streets in military vehicles; the assault and detention of opposition politicians and a heavy presence of security personnel in Khartoum. The authorities have also restricted press freedom, closing down the internet in an effort to limit the information flow of developments in Sudan.

CSWs Chief Executive Mervyn Thomas said: “We extend our deepest condolences to the families of those who have lost loved ones, and pray that the injured would soon recover. It has been a particularly difficult week for the Sudanese people, as the violence was launched just before Eid, the celebration of the end the Ramadan fast. We condemn these brutal attacks on innocent civilians in the strongest terms and welcome the African Union’s decision to suspend Sudan from the regional body and stand in solidarity with the Sudanese people. There is an urgent need to restore civilian rule and hold those responsible for the lethal attacks on unarmed protestors to account.”

Sudan is currently led by a Transitional Military Council (TMC) which took over after the arrest of former President Omar al Bashir on 11 April. The TMC has been responsible for negotiating with protestors to establish a civilian-led transitional government to lead the country prior to scheduling democratic elections. Negotiations between the TMC and the Forces for Freedom and Change (FFC) have been difficult, with disagreement over how many civilian and military representatives should be in the transitional presidential council. Differences over the role of Shari’a law were also a key issue in the negotiations.

On 6 June, the UK Prime Minister’s Special Envoy on Freedom of Religion or Belief, Lord Ahmad of Wimbledon, said in response to an oral question in the House of Lords on the situation: “We condemn the violent attacks by the Sudanese security forces against peaceful protesters in Sudan this week, which left many civilians dead or injured. The Transitional Military Council bears full responsibility. The United Kingdom calls for the human rights of all Sudanese people to be respected, the resumption of the political process with the protesters and the opposition, and an agreed transfer of power to a civilian-led Government, as demanded by the Sudanese people, in a swift, orderly and peaceful manner.”

Mr Thomas continued: “CSW urges the international community, in particular member states of the UN Human Rights Council and the Security Council, to emulate the African Union by holding the TMC to account for the deaths of civilians and its unwillingness to transfer power to a civilian-led transitional government. We call in particular, for the Security Council to refer the situation in Sudan to the International Criminal Court, with specific reference to the violations committed under the watch of the RSF leader, Lieutenant General Mohamed Hamdan "Hemeti" Dagalo.  The current situation has reached crisis point, and all efforts to ensure justice and a swift transfer of power to a civilian administration are essential for peace in Sudan and stability in the region.”