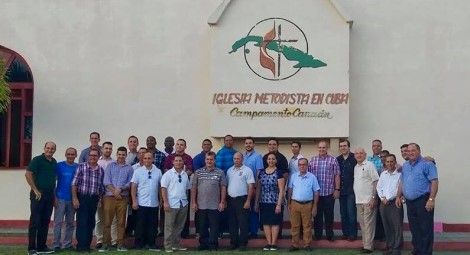 Protestant leaders gather at a Methodist retreat centre in Cuba for the launch of the new alliance.

Seven Protestant denominations in Cuba, including the five largest in terms of membership, joined together to launch a new Cuban Alliance of Evangelical Churches on 11 June in a show of inter-denominational unity unseen on the island since the 1959 Revolution.

A statement signed by the leaders of the seven denominations said: “The primary reason behind the creation of this alliance is that the denominations which form part do not feel represented by the Cuban Council of Churches before the authorities and the Cuban people and feel motivated to work united in the defense of Biblical values.”

The move to unify under a new evangelical alliance follows an unprecedented campaign led by the same denominations against a new constitution which was approved in a general referendum in February. The new constitution contains significantly weakened language on freedom of religion or belief and freedom of conscience as compared to the previous constitution. Since the referendum, the five largest Protestant denominations have told CSW that the Cuban government has barred them from receiving any visits from abroad.

The Cuban Council of Churches (CCC), to which the statement refers, also groups together a number of Protestant denominations and other religious groups. The CCC maintains a close relationship with the government and is generally publicly supportive of its policies. Despite representing a small minority of Protestants in terms of numbers, the CCC is usually presented by the Cuban government both domestically and internationally as speaking on behalf of all Cuban Protestants. Over the decades, CCC leadership has consistently downplayed religious freedom concerns in Cuba.

CSW’s Head of Advocacy Anna Lee Stangl said: “Since the Revolution the Cuban government has attempted to keep the various denominations divided and until now this has been mostly successful. Attempts at collaborative work, even at the local level, have been met with harsh crackdowns. The public decision of these seven leaders and the denominations they represent to come together and speak with one voice, even as their churches are experiencing discriminatory behavior on the part of the government, is incredibly brave and provides a platform for a new and important voice from Cuban independent civil society.”