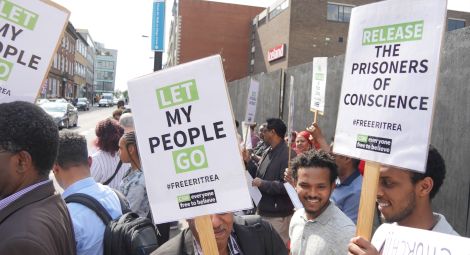 Concerns for patriarch after excommunication attempt

There is renewed concern for the wellbeing of the legitimate leader the Eritrean Orthodox Church (EOC), Patriarch Antonios, following a move by pro-government bishops to excommunicate him.

A statement dated 17 July, ostensibly from six bishops but signed only by five, including the general secretary of the Holy Synod Bishop Lukas, accuses Abune Antonios of having committed heresy, strips him of all official authority, and states that the EOC would continue providing him with food and shelter.

The missing signature is reportedly that of Abune Salama, Bishop of Debub-Mendefera.

However, in a video smuggled out of Eritrea in April  2019 which was used as a pretext for his excommunication, Patriarch Antonios, who is severely diabetic and suffers from high blood pressure, described how his fellow clergy had abandoned him and did not care for his health or wellbeing. The patriarch currently resides in the servant’s quarters of a villa inhabited by Bishop Lukas, who is widely thought to harbour ambitions of becoming patriarch, and another pro-government bishop.

The 92 year-old patriarch has been under house arrest since January  2007, after being removed from office in  2006, in violation of canon law, for repeatedly objecting to government interference in ecclesiastical affairs and refusing to expel  3000 members of the Orthodox renewal movement, Medhane Alem.

His removal cemented the government’s control of the EOC, and created a schism in the Church. The removal was not sanctioned by the Papacy in Egypt, which installed *the patriarch and his predecessors, and which did not recognise his government-approved replacement, the late Bishop Dioscoros.

According to church canon, the Holy Synod can only be convened by the anointed patriarch, and prior to his removal Abune Antonios had excommunicated the clergy that had convened the Synod which had engineered his removal. It is therefore doubtful whether the bishops have the authority or capacity to excommunicate him.

On 18 July, the patriarch’s case was highlighted by Eritrean Gospel singer and former prisoner of conscience Helen Berhane, who had been invited to speak at the 2nd Annual Religious Freedom Ministerial in Washington DC, convened by the US State Department.

Ms Berhane, who was arrested in 2004 and held in a metal shipping container for 32 months,  visited the White House on 18 July along with 26 other survivors of  religious persecution from across the world. She used the opportunity to draw the attention of President Trump to the plight of the patriarch, whom she mentioned by name, and of other* church leaders imprisoned without charge or trial for over ten years.

Later, the patriarch’s case was amongst those highlighted by Vice President Pence in his remarks at the Ministerial. He said that “Abune Antonios continues an already 12-year-long house arrest because he refuses to ex-communicate critics of the government in his church.”

CSW’s Chief Executive Mervyn Thomas said: “The purported excommunication of Patriarch Antonios entirely lacks legitimacy, as those behind it have neither the moral nor the professional authority to issue*such a pronouncement. It is a desperate move, providing a clear indication that the patriarch’s will and spirit remain unbroken, despite being subjected to circumstances, pressures and humiliations designed to elicit his resignation or even demise.”

“We reiterate our call for Abune Antonios’ unconditional release and reinstatement, and urge representatives of sisterly Oriental Orthodox churches to visit him, not only to ensure his reinstatement and wellbeing, but also to facilitate healing and reconciliation within the Church, which has been damaged by political exigencies that violate canon law. We also appeal to the High Commissioner for Human Rights  to the UN, the US government and  others in the  international  community to make urgent representations with the Eritrean authorities regarding the patriarch’s current situation, calling for his immediate release and restoration, and leaving the government in no doubt of its ultimate responsibility for his continued wellbeing.”